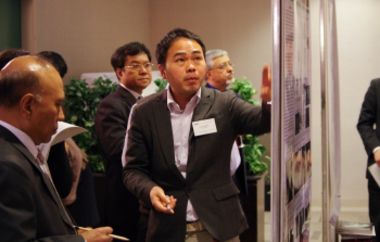 Indonesian researcher Joni Jupesta is currently a Postdoctoral Fellow at the United Nations University in Japan. Here, Jupesta contributes to policy briefs on green economic growth, climate change governance, and poverty alleviation in Indonesia, which draws on his multidisciplinary research across the forestry, agriculture and energy sectors.

Now, his applications-oriented research has also been credited by the Asia-Pacific Network for Global Change Research (APN). He was awarded as Principal investigator (PI) for funding under the Low Carbon Initiatives (LCI) Programme. 44 Expressions of Interest were handed in for the programme 2013-2014, out of which 7 proposals were approved. One of them being Jupesta’s, titled “Low Carbon Urban Infrastructure Investment: Cases of China, Indonesia, and Japan”.

Also, the APN held its 18th Inter-Governmental Meeting (IGM)/Scientific Planning Group (SPG) Meeting and associated committee meetings on 12 April 2013 in Kobe, Japan. The poster session on Day 1 of the IGM/SPG featured activities under the mentioned LCI framework, and provided an opportunity for young scientists to present their latest work to the APN community. This year, thirteen young scientists from APN member countries currently studying or working in Japan were invited to join the poster session. Following evaluation by the IGM participants, Dr. Joni Jupesta was awarded the “Mitra Award for Global Change Research” in recognition of his outstanding poster presentation. On Day 3 of the IGM/SPG Meeting, Jupesta was then invited to make an oral presentation at the main session.

On top of that, Jupesta has recently won the National Energy Globe Award for Japan with his project "Sustainable Energy Transition in Japan post Fukushima”. Over 100 countries submitted a total of 1051 entries. The projects of all national Energy Globe winners will be presented on 5 June 2013, the UN’s World Environment Day, to a global public on the Energy Globe Homepage.