Interview with Dr Gusev in the context of the "German-Russian Year of Education, Science and Innovation 2011-2012". 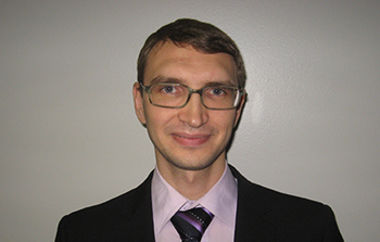 Under the supervision of Professor Carlo Rubbia, the Nobel Prize Winner in Physics, Alexander has been working on the future role of natural gas in energy transition, electricity markets, and the international governance of renewable energy during his PhD studies.

Prior to joining the Institute for Advanced Sustainability Studies, Alexander worked as a visiting researcher at the German Institute for International and Security Affairs in Berlin and as an Assistant Professor at the Higher School of Economics in Nizhny Novgorod, Russian Federation.

Alexander is currently working as a Senior Solutions Architect at Cluster Reply and decided to combine his knowledge in the sphere of energy with new digital developments. For this reason, he took several advanced trainings and certified as Big Data and IoT Engineer.

Alexander Gusev began his academic career in his native Russia where he earned a Master’s Degree in Management and Public Policy at the Nizhny Novgorod State Linguistic University in Nizhny Novgorod.

He then continued and completed his studies at the Institut Européen des Hautes Études Internationales (IEHEI) in France with a Master’s Degree in Advanced European and International Studies, before returning to Nizhny Novgorod State Linguistic University for a PhD in Political Science with a focus on energy policy. During his studies, Dr Gusev worked as an assistant at the Ministry of Industry and Innovation of Nizhny Novgorod where he acted as a liaison to other ministries in the region and designed economic development strategies.

Besides serving as the head of the Analytical and Research Council of Young Scientists, Dr Gusev has worked as an associate professor for world economics and international relations in the Department of International Relations and Economics at Nizhny Novgorod State Linguistic University since 2009. In his current role, he has been lecturing and organising working groups in addition to arranging meetings with experts, diplomats and politicians. Not only does he participate in social initiatives and projects but also in consultations on the socio-economic situation of the region. Dr Gusev has extensively investigated differences between respective energy perceptions and approaches in Russia and in the European Union. For future cooperation on energy issues, he has thus formulated a number of recommendations. In addition, he is currently also working at the Higher School of Economics.

The jury noted Dr Gusev’s scientific work on the interaction between the Russian Federation and Western European partner countries in terms of politics, economics and social structure. What equally impressed the jury was the broad range of subjects he has tackled and the stringency with which he compares different political systems. The panel felt that with his work, Dr Gusev helps lay an important foundation for cross-national and global dialogue about sustainability.

“I’m captivated by the idea of participating in the forum, as it provides an opportunity to exchange experience with public and private-sector agents and researchers and to find out how research and technology development can be used most effectively to achieve long-term economic development,” Dr Gusev says of the Green Talents Forum. “The participation in the forum will also give me a chance to gain a deeper understanding of sustainable development and, in particular, energy issues.”