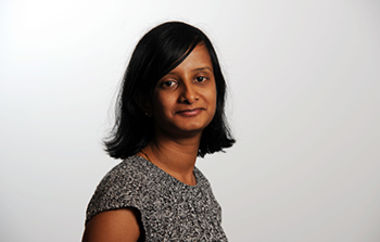 Indu’s research focuses on the observation and modelling of techniques for sustainable urban infrastructure planning.

In her PhD thesis, Indu developed a modelling framework to estimate urban heat fluxes and helped establish an urban water and energy observation network in the Salt Lake Valley. Afterwards, she did her postdoctoral research at Tennessee Technological University, United States of America.

Indumathi Jeyachandran began her academic career in her native India where she earned a bachelor’s degree in civil engineering at Government College of Engineering in Salem and a master’s degree in remote sensing & geographic information systems (GIS) at Anna University in Chennai.

For her PhD, Jeyachandran went to the University of Utah in the United States. There, she developed a modelling framework to estimate urban heat fluxes and helped establish an urban water and energy observation network in the Salt Lake Valley. Subsequently, she did her postdoctoral research at Tennessee Technological University in Cookeville till May 2009. Since June 2009, she is working with the research team at University of Utah as a visiting researcher.

Dr Jeyachandran’s research focus is urban systems sustainability. Maybe the most familiar example of the impact urban centres have on their environment is the phenomenon known as “urban heat island.” This refers to the fact that urban centres tend to be warmer than their surroundings because many of the materials they are made of do retain heat. Dr Jeyachandran is exploring how urban subsystems like water cycle, microclimate, energy use and others interconnect. The jury was impressed by the scientific work she has done on this subject and especially the spectrum of her work, which ranges from ground-based analysis to the use of satellite information. Given Dr Jeyachandran’s excellent research profile, her work has a lot of future potential.

Dr Jeyachandran is eager to participate in the Green Talents Forum. During her visit to Germany, she hopes to learn more about one subject that is particularly relevant to her work: “Germany has been pioneering in green roofs research, technology and usage,” she says.