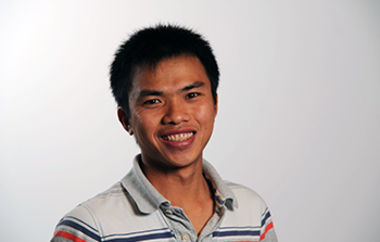 Hung’s most current research involves in understanding the nanoscale properties and device physics of organic electronic materials and devices. Hung’s PhD research contributed to the comprehension of molecular assembly and charge transport in Organic Field-Effect Transistors (OFETs). The development of OFETs for electronic devices is important because their low temperature and high throughput processing can reduce the energy consumption for manufacturing, compared to its inorganic counterparts.

During his studies in Vietnam, he won numerous awards, among them a full scholarship plus a certificate of merit for excellent students. At present, Mr Phan participates as a researcher in the SEAHERO (Seawater Engineering & Architecture of High Efficiency Reverse Osmosis) Project at the Center for Seawater Desalination Plant at the Gwangju Institute of Science and Technology in Korea.

For the past five years, Mr Phan has been studying and working in water and wastewater treatment, especially desalination, which contributes to assuring a sustainable municipal and industrial water supply and helps terminate disease and deaths related to unsafe water. Desalination using so-called reverse osmosis works much like filtration: The salt water gets pressed through a membrane, which holds back larger molecules and ions – and salt. One challenge of this method is organic fouling, the accumulation of micro-organisms, plants, algae or animals on the membrane. Mr Phan has been investigating ways of dealing with the organic fouling mechanism of reverse osmosis membranes on the molecular level.

Among the reasons for Mr Phan’s selection, the jury noted his scientific achievements in the development of osmosis membranes for the purification of seawater. Also contributing to the jury’s decision was the fact that his scientific work is characterised by the combination of chemical-analytical and model-based approaches. In a world with increasing population pressures and demands on a limited fresh water supply, the importance of an energy-efficient method for water desalination is obvious.

Mr Phan sees the Green Talents Forum as a chance both to initiate additional collaboration with leading German research centres in membrane-based water treatment and to learn more about photovoltaic. Such solar-cell research will be the focus of his studies while pursuing his PhD.

“I’d like to seize this opportunity and broaden my understanding of how Germany manages to meet so much of its domestic demand through renewable energy sources”, he says.