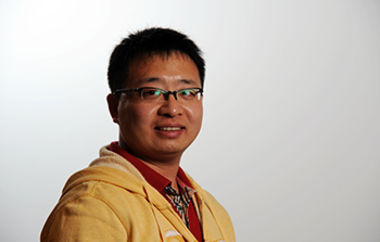 Zhao Dewei is originally from Liaoning Province in China. He earned both his Bachelor’s and Master’s Degree in engineering in his home country before moving to Singapore.

There, he is currently working towards his PhD at the School of Electrical & Electronic Engineering at Nanyang Technological University. His research focuses on organic solar cells with tandem and inverted structures. Organic solar cells with a tandem design consist of two layers of cells. One absorbs the high energy solar photons but is transparent to the lower energy photons, which are in turn absorbed by the second layer. This makes it possible to collect a broader light spectrum. In other words, such solar cells are more efficient. Mr Zhao hopes that his research will help optimise the performance of such organic solar cells since they are light weight and potentially cheap to produce. As such, they could play a key role in the future of sustainable energy technology.

The jury was just as impressed with Mr Zhao’s comprehensive expertise in the fields of organic solar cells, organic light-emitting diodes and organic thin-film transistors as with the 25 scientific papers he has already published, including several in prestigious international peer-review journals.

Mr Zhao views the Green Talents Forum as a unique opportunity: “There are so many famous professors and professional scientists in Germany who are actively and innovatively leading the advances of organic solar cells,” Zhao says.