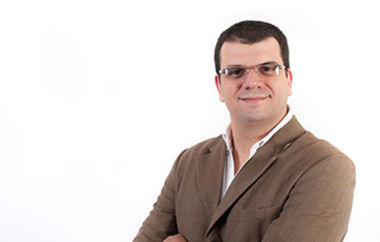 Current position: Head of the Group ‘Coupled Dynamical Systems’ and Lecturer at the Institute of Structural Analysis, Leibniz University of Hannover, Germany

One year after receiving the Green Talents award, he moved to Germany and worked for almost three years at Fraunhofer IWES as a research associate. Since July 2015, he has been the head of a research group at the Leibniz University of Hannover and gives lectures at undergraduate and graduate level.

Cristian Gebhardt, a PhD candidate and an associate professor at the National University of Cordoba in Argentina, is undertaking an ambitious project to develop a technique to numerically simulate the unsteady and non-linear aeroelastic response of large-scale horizontal-axis wind turbines.

As the core of his PhD thesis, Mr Gebhardt developed a fully non-linear code to simulate the aeroelastic behaviour of wind turbines. Using this tool, he expects to predict reliable margins for aeroelastic instabilities, such as flutter and divergence. By understanding these margins, wind turbine designers can improve wind turbine performance. “The simulations will also provide insights into non-linear phenomena, such as dynamic buckling and post-critical behaviour under different wind conditions, and will allow us to explore novel control strategies that take advantage of non-linearities,” he says.

At present, most wind turbines are lightweight with high-aspect ratios and extremely flexible blades, but the aeroelastic behaviour of the blades is not well understood. Mr Gebhardt hopes to contribute to the understanding with his numerical prediction tool that is accurate and reliable so that lighter, cheaper and more efficient wind turbines can be built.

He has published scientific articles in journals and for technical conferences. His articles include: “Numerical Simulations of the Aerodynamic Behavior of Large Horizontal-Axis Wind Turbines” in the International Journal of Hydrogen Energy in 2010, and “Analysis of the Drivetrain Performance of a Large Horizontal-Axis Wind Turbine: An Aeroelastic Approach” for the NAFEMS Nordic Conference in Gothenburg, Sweden, in 2010.

The jury noted with interest Mr Gebhardt’s work in building the model to optimize onshore and offshore wind turbines by calculating their aeroelastic properties. It was also impressed with the large number of publications he has made in his field as well as the conferences and research projects he has participated in.

His interest in Germany includes the institutional, governmental and social aspects that make the country a world leader in sustainable development. “I want to understand how Germany became a country with rigorous standards and high-quality developments in almost every branch of science and technology with a genuine and honest commitment for the environment,” he said.