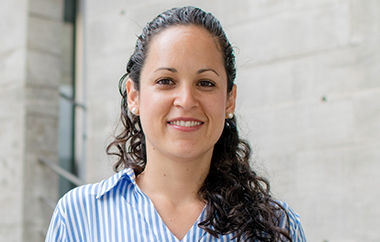 Maribel’s research contributes to increase the quantity and quality of water resources, while guaranteeing a natural treatment and an appealing green space. Currently, she is working as an advisor in a sanitation and environmental Peruvian-German project that tries to find a solution for a vulnerable community in the surroundings of Lima. The project involves the implementation of ecosan technologies that could solve the lack of sanitation in the area.

PhD in Environmental and Sanitary Engineering

Ms Zapater conducts her doctoral studies in a collaboration project between the UNESCO-IHE Institute for Water Education in the Netherlands and the Universidad del Valle in Colombia. Part of her research focuses on the design and development of a novel constructed wetland for footprint reduction.

Maribel Zapater Pereyra is dedicating her work to sustainable water sanitation with a narrow focus on constructed wetlands. Constructed wetlands are man-made replicas of natural wetlands that recreate the mechanisms that occur in these systems for the purpose of wastewater treatment.

The technology could significantly increase the quantity and quality of water resources and be used as a basis for providing basic sanitation, a human right that is often lacking in developing countries, she says.

For these reasons, after earning an MSc degree in Desert Studies specialising in Water Resources and Management, Ms Zapater was involved in a project between Israel and her native Peru in which project members analysed the properties of soil that had been irrigated with reclaimed water from an oxidation pond and from a constructed wetland.

Ms Zapater’s goal after her studies is to combine her civil engineering interest with her expertise in water sanitation by designing and building wastewater treatment systems for the private sector. In the end, she wants to help people to have access to proper and simple sustainable sanitation technology while also contributing to science with her work.

The jury said Ms Zapater’s goal of making sanitation more available around the world is a noble one, and her work combining engineering and water resource management through constructed wetlands will surely make an important contribution to this end.

Her interest in Germany began when she came across numerous references in the constructed wetlands literature about work taking place in Germany. For instance, she learned that German scientists were among the first to propose the idea of using plants to treat wastewater, thereby laying the groundwork for modern-day constructed wetlands. “My time in Germany will be a unique experience in which I hope to cooperate with German researchers on the topic of pharmaceutical removal from wastewater,” she said.