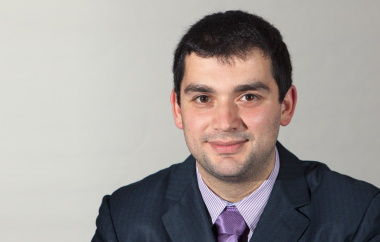 Alexander’s research focuses on offshore biorefineries. During his doctoral studies he developed advanced biotechnologies and bioengineering products to advance health and environmental engineering.

Alexander’s PhD thesis was a breakthrough in the production of bioelectricity from the electrolysis of biological matter and received worldwide media coverage. After graduating he began his postdoctoral work at the University of California, Berkeley and Harvard Medical School, Boston, United States of America.

Born in Russia, raised in Israel and most recently a postdoc at UC Berkeley and Harvard, USA, Alexander Golberg is a visionary scientist driving advances in biotechnology and bioengineering to make the concept of bio-refineries a reality – and to change the way the world generates fuel, chemicals, feed, and food.

The prospect of a 30 percent increase in global population by 2050, and the associated explosion of energy demand in developing countries, is for many a sobering thought. But Alexander Golberg sees it as an opportunity to bring large-scale change to the way the world generates things like fuel, chemicals, feed, and food. For Golberg, bio-refineries, which produce energy and value-added projects from biomass rather than petroleum, could play a big role in the transformation. “In countries like India and China, the energy infrastructure is still in its infancy, so it’s an outstanding opportunity to implement new bio-refinery systems,” says Golberg.

For his part, Golberg is developing advanced biotechnologies and bioengineering products to help make the concept of bio-refineries a reality. His PhD thesis – a breakthrough in energy production from the electrolysis of biological matter – received worldwide media coverage and is the basis for technology currently developed in Sri Lanka and Saudi Arabia. As a postdoc, he has developed a new energy efficient technology for food storage. Also hailed as a landmark breakthrough, this work demonstrates that pulsed electric fields can achieve a similar biological effect as refrigeration for a fraction of the energy cost. The Green Talents jury was particularly impressed with Golberg’s concept for small-scale distributed bio-refineries based on macro-algae and the impact his work is having on renewable energy research around the world.