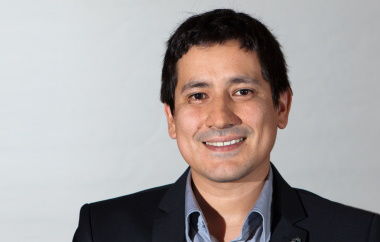 With his research, Javier aims to create sustainable transport systems in an effort to reduce energy consumption and its environmental impact.

In his PhD Javier proposed innovative energy management solutions for hybrid electrical vehicles and has successfully validated these control laws in real-time on a full-scale hybrid vehicle and in a freight train.

After his research stay at the Technical University of Berlin, Germany, he changed his research area and has been working on rural electrification and micro grids since  then.

With transportation representing more than 25% of the world’s energy consumption, Green Talents winner Javier Enrique Solano Martínez is clear on his mission: “My work on sustainable transport systems is part of the effort to reduce this consumption and its environmental impact.”

Solano began chipping away at this task during his Master’s, successfully optimising a flywheel system capable of reducing the energy consumption in vehicles by recovering the braking energy. For his PhD work, Solano turned his attention to the unique challenge posed by hybrid electrical vehicles (HEVs). “Unlike conventional vehicles, hybrids have multiple energy sources,” he explains. “These different sources need to be distributed in a way that not only meets power demands but other requirements as well, such as comfort, reducing energy consumption and minimising emissions.” Using type 2 fuzzy logic control, Solano proposed innovative energy management solutions for HEVs and has successfully validated these control laws in real-time on a full-scale heavy-duty hybrid vehicle.

Now a postdoctoral fellow, Solano has turned to even larger vehicles, working with Alstom Transport, the world’s first maker of high speed trains. His research involves optimal control to reduce the energy consumption in trains.

The jury noted Solano’s commitment to increasing transportation system efficiencies with his work on energy management in hybrid electric and fuel cell vehicles. The jury was also impressed by the awards received for his PhD work, including one for industrial innovation from the Conference for Young Researchers in Electrical Engineering (JCGE 2011).