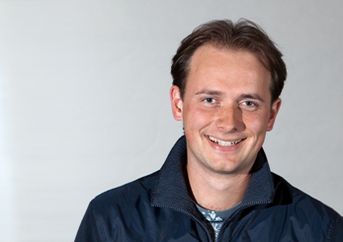 Viktor holds a PhD in Solid State Electronics and was a Georg Forster Postdoctoral Fellow at the Helmholtz-Center Berlin, Germany. With a background in semiconductor physics and material science, he is helping to develop a new generation of electronic and photovoltaic devices.

After receiving the Green Talents award in 2012, Viktor continued his research as Assistant Professor and Postdoctoral Fellow at Chernivtsi University, Ukraine and the University of California Santa Barbara, United States of America. He received a scholarship from the President of the Ukraine in 2013 and became an editorial board member for ‘Scientific Reports’ (Nature Publishing Group, London, United Kingdom) in the field of electronics, photonics, and device physics.

With a background in semiconductor physics and materials science, Viktor Brus is helping develop a new generation of solar photovoltaic (PV) cells to move PV from the fringe and into the mainstream of worldwide electricity production.

A PhD student in Electronics and Energy Engineering at the Frantsevich Institute in the Ukraine, Viktor Brus is quick to point to Germany as the global leader in photovoltaic (PV) applications: “The German solar PV industry installed 5.9 GW and provided about 3% of total electricity in 2011,” says Brus. “Some market analysts expect this could reach 25% by 2050.” The goal to transform the efficiency of PVs on this scale is powering the growth of semiconductor materials science today – and it’s a huge motivator for Brus.

Brus has focused his research on heterojunction solar cells, which represent the next generation of PV cells after single-material (homojunction) silicon PV cells. Heterojunction cells consist of different thin-film semiconductor materials, which form distinctive top and bottom layers. They can absorb light better than silicon and better facilitate the flow of electrons. Brus performs quantitative analysis of various solar cells and has fabricated a number of new and previously not studied heterojunctions for use in PVs and light emitting diodes.

Brus is one of the most productive and active publishing young scientists in Ukraine. Since 2009 he has published more than 50 works including 15 articles in peer-review international journals, 10 articles in national Ukrainian journals, 4 Ukrainian patents and about 30 abstracts presented at Ukrainian and international conferences. The Green Talents jury noted his excellent academic profile and his outstanding record of publications.