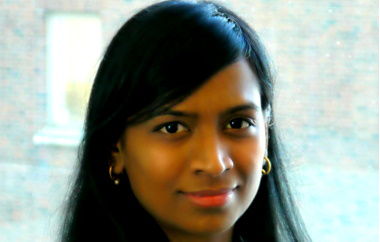 Mita’s independent research focuses on developing sustainable nanomaterials for renewable energy production, improving food security, and solar desalination. In her doctoral work she conducted research on nanomaterial made of silicon, which is widely available in the environment and could transform computers and cell phones into more energy-efficient gadgets.

Mita received the Green Talents award, which gave her the opportunity to study carbon dioxide sequestration during her two-month research stay at the Technical University of Munich, Germany. Afterwards, she worked on mesostructured earth abundant materials for fuel generation at the California Institute of Technology, United States of America. Mita was awarded a Postdoctoral Fellowship by Natural Sciences and Engineering Research Council of Canada in 2014 to carry out her work at Caltech.

Award-winning chemist Mita Dasog conducts research on nanomaterials made of one of the most abundant elements on earth, silicon, in order to make our computers and cell phones more energy efficient.

What if your smartphone were smart enough to save the environment? Mita Dasog has been studying and researching to solve this question for a long time. The main objective of her research project is to prepare various types of silicon nanomaterials at low temperatures. By using silicon to produce nanomaterial particles that will end up in our computers, smartphones and tablets, Dasog plans to decrease our dependency on the less available resources.

Dasog emphasises the importance of making use of abundant sources on earth in order to develop a technology based on these materials. Therefore, she is using the second-most abundant element on earth – silicon – that will serve for exactly this purpose. She notes that her aim “is to not only develop chemistry based on sustainable resources, but to also improve upon the existing methods and develop straightforward synthetic routes using less harmful reagents.”