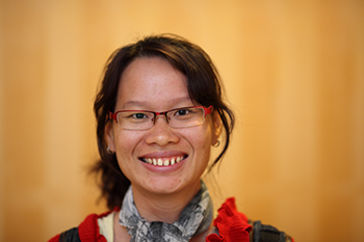 Ngoc Lieu holds a PhD in Chemical Engineering. She has a keen interest in finding a truly renewable solution to the world’s growing energy demand. In her PhD research, she focused on the purification of biofuels, which are produced from renewable biomass such as crop residues and waste materials. As a green alternative to fossil fuels, they are becoming future transportation fuels used for cars, buses, airplanes and trains.

In 2013 Le won the Green Talents award. The jury was impressed by her focus on energy-saving techniques for the separation and purification of biomass materials. After her participation, she joined the King Abdullah University of Science and Technology, Saudi Arabia, as a postdoctoral fellow, where she works on membrane materials and technologies for water and energy sustainability. Since her research stay in Germany, she has extended her network to German experts and collaborated with Prof. Mathias Ulbricht from the University of Duisburg-Essen on several studies.

Biofuels are regarded as a way to reduce the environmental impact of the world’s growing energy demands. Now, Ngoc Lieu Le wants to make this green alternative even greener.

Ngoc Lieu Le does not want waste to go to waste. That’s why her current PhD project is focused on the purification of biofuels produced from crop residues and waste materials.

Le believes that energy is among the most critical issues related to the swelling global population, and that renewable energy is the best way to remedy this problem.

“The current purification technique, distillation, requires a large amount of energy to purify biofuels due to the azeotropic formation of biofuels with other components in fermentation broths,” she says. “That results in the increasing criticism of the sustainability of biofuels.”

Le’s work therefore offers a truly renewable solution to the world’s energy demand. “The most important benefit of renewable energy sources is the decrease of environmental pollution,” Le says. “Liquid fuels, or biofuels, which are produced from renewable biomass, are becoming our future transportation fuels used from cars, trucks, buses, airplanes, and trains.”

The jury emphasised the importance of biofuels as an alternative to fossil fuels and Le's focus on energy-saving techniques for the separation and purification of biomass materials.