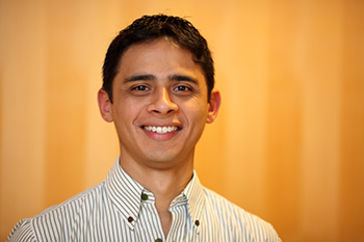 Oscar’s aim is to contribute to reducing the operational expenses of wind turbine systems by improving the structural performance and lifetime predictability of wind turbine blades.

Oscar Castro Ardila started out as an undergraduate, researching Wind Energy. Eventually, he obtained an MSc in Engineering with emphasis on Wind Energy and is now leading his own research group. It seemed unavoidable that such a talented researcher would not catch the ‘sustainability bug’. As he says: “I feel strongly motivated to make use of this opportunity to make contributions to both local and global knowledge on sustainability”.

At only age 27, Oscar Castro Ardila was recently asked to lead his own research group: the Diffusion and Use of Alternative Energy Sources (GDDTA) in Mechanical Engineering at his alma mater, the Universidad Valle in his native Colombia. He believes that in order for sustainability to be advanced, all disciplines should work together: architects, biologists, environmentalists and sociologists. Interestingly, he also prefers to work with sustainability projects that involve not only students but also the national community and regional industry. All of which he managed to combine and include in past projects.

His current GDDTA research group is his most ambitious yet: “We are using hybrid renewable energy systems for power generation, producing renewable biofuels, using photovoltaic electrolysis to obtain potable water and hydrogen, and in the end we are trying to advance the renewable energy potential in rural and urban Colombian zones,” Castro Ardila says.