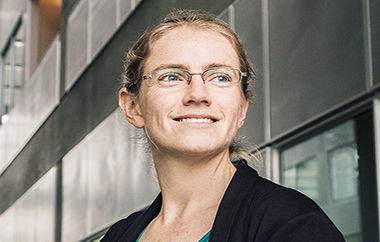 Heather’s interdisciplinary research team at the University of Victoria tackles challenges at the interface of Green Chemistry, Civil Engineering, and Public Health, centring their efforts around creating tools for better monitoring of drinking water contaminants and the design of safer alternative technologies in water treatment.

PhD in Green and Inorganic Chemistry

Heather sees technological interventions as one piece of the puzzle for empowering communities globally. Her doctoral and postdoctoral work at the University of California, Berkeley, have taken her to Poland, Jordan, India, and Germany to perform outreach, field work, and research. She has worked in non-platinum fuel cell catalyst design, air-sensitive metal chemistry, and drinking water remediation, as well as in the development of safer building materials for low-income communities, and alternative preservatives for home and personal care products. Heather has started her own research group with a faculty position in the University of Victoria‘s Green Civil Engineering programme in January 2018.

With a background in Inorganic Chemistry, which she studied in Canada, Heather received scholarships to the USA and Germany for her undergraduate and MSc degrees. As a recent PhD graduate in Green and Inorganic Chemistry at the University of California Berkeley, she helps lead a team of researchers looking for alternatives to platinum for use in fuel cell and battery devices. These devices are particularly important for the future of sustainable energy as they allow energy from intermittent sources, such as wind turbines or solar panels, to be stored in chemical bonds before being released. However, the use of platinum in the catalysts of such fuel cells poses an environmental problem: there is a limited supply world-wide and it remains in the environment after the end of its useful life.

Heather and her team are exploring the use of “biomimetic molecular complexes” made from Earth-abundant metals with lower toxicity such as iron, copper and cobalt instead of the traditional platinum catalyst. They are working at the interface of solution and surface physical chemistry, which Heather describes as one of the key advantages of her research: “It is the fusion of ideas and perspectives from these two established fields of chemistry that has allowed me to create a novel and potentially useful system.” Whilst research is still ongoing, Heather is also keen to explore the potential commercial dimension of the alternative catalysts and their future commercial viability.

The jury appreciated Heather’s commitment to Green Chemistry as a relatively new field of study with vast potential for radical new thinking. They also believe her experience as an experimental scientist and team leader will help her take full advantage of opportunities for scientific exchange during the extended study visit to Germany.