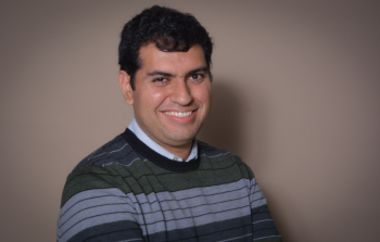 Patricio’s research focuses on the improvement of microgrids by using a novel approach to their stable operation. With his academic work he aims to promote the adoption of a sustainable, renewable energy supply in both developing and developed economies.

During his PhD studies at the University of Wisconsin-Madison, United States of America, Patricio worked on the so-called ‘Microformer’, an alternative power distribution transformer mainly built using the transformer from a post-consumer microwave oven.

Following the Green Talents award in 2014, he worked as a researcher at the Institute for Drive Systems and Power Electronics (IAL) at Leibniz University in Hannover, Germany. Together with his team, he developed hardware and software tools for microgrids and renewable energy evaluation.

With a PhD in Power Engineering, Chilean-native Patricio Mendoza Araya studied the stability of microgrids using a novel and innovative approach. His aim is to promote the adoption of a sustainable renewable energy supply in both developing countries and developed economies.

With a remarkable academic career, Patricio has been studying and researching microgrid technologies applied to concepts such as electricity reliability, energy independence and community involvement. His work on the improvement of microgrid technology is an especially important step in the transition from traditional to clean energy. Patricio is convinced that energy is one of the most critical issues to achieve a sustainable society. In fact, he believes that technological barriers should be reduced to allow local communities to actively participate in making their societies more sustainable.

Microgrids, as opposed to centralised grids, are more efficient and sustainable due to their capability to collect energy from different local energy sources, such as fuel cells or solar power. Because energy is produced locally, this allows for lower environmental impacts and improved security of supply. Moreover, smart microgrids determine effectively, during blackouts for example, where backup electricity is needed the most.

During his PhD studies at the University of Wisconsin-Madison (USA), Patricio worked on several projects related to sustainable development. However, his crowning achievement is the ‘Microformer’: “We proposed an alternative power distribution transformer mainly built using the transformer from a post-consumer microwave oven”, he said, adding that the aim of the project was to foster a greater and more sustainable electrical penetration within rural areas. This innovative idea won him and his team 50.000 USD in funding, helping them to further develop their ideas in theory and practice.

After finishing his PhD at the University of Wisconsin-Madison, he decided to return to Chile, where he now has a full time position at the Electrical Engineering department at the University of Chile. Here, he is working on a new multidisciplinary project that will study consumer behaviour under different energy pricing schemes.

The jury lauded Patricio’s interdisciplinary and novel approach in a field of growing importance. They expect his work to largely contribute to sustainable rural development while making the use of renewable energy more efficient.