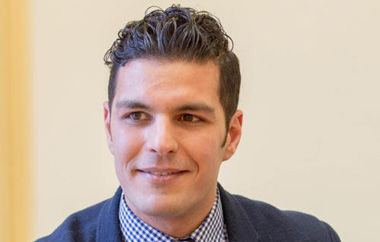 The International Coordinating Council of the Man and the Biosphere (MAB) Programme of UNESCO has named the recipients of the 2017 Young Scientists Awards and the Michel Batisse Award for Biosphere Reserve Management. The selection was announced during the MAB Council’s annual meeting in Paris, France (12 to 15 June). One of the winners is Dr Amirhosein Mosavi, Green Talent in 2015.

The MAB Programme has been granting awards of up to $5,000 each since 1989 to encourage young researchers to undertake work on ecosystems, natural resources and biodiversity. This prestigious award goes to 4-7 young scientists every year. Seven young scientists are to receive the 2017 UNESCO MAB Young Scientists Awards. Please have a look into the winners list here. Dr Amirhosein Mosavi wins the UNESCO Young Scientists Award on his research on sustainablilty in the field of "Monitoring and assessing sustainability in Biosphere Reserves utilizing sustainable business models".

In addition to UNESCO Young Scientists Award, this year Dr Mosavi also received the Future Talent Award of TU-Darmstadt, Go Styria Award from University of Graz, and a Research Fellowship Award from Bauhaus-Universität Weimar, where he reasoned that humanity requires accurate prediction-decision tools to reduce the climate change impacts. As an expert in both data science and decision science, he consulted world's largest companies with advancement of their prediction and decision models to anticipate the consequences of the potential actions in order to make better decision in an automated manner for sustainable development.

Dr Mosavi is involved in active contribution on developing techniques for generating predictive models that promotes sustainable development. With the aid of data sciences, the past events are to be analyzed in order to provide the vision about our future decisions and actions. With the aid of predictive models we will be able to study the potential effects of our behavior, he says. This would indeed provide the ability to develop and grow in a more sustainable direction. Dr Mosavi coins the term “predictive-decision model” what he believes in its extensive potential for transforming latest discoveries into a major innovation in decision science and prediction. He believes in the potential of artificial intelligence technologies of Big data, machine learning, internet of things (IoT), and deep learning to discover the greener ways of living.

Dr Mosavi´s contributions and publications are available via the following link: https://www.researchgate.net/publication/294428032_Mosavi_Amir_Business_Modeling_Budapest_Obuda_University_2016