Are you interesting in working at...? 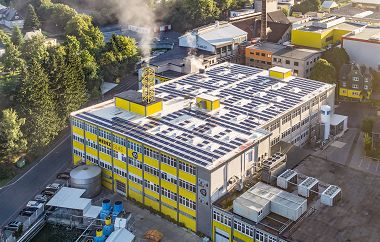 HEINZ-GLAS GmbH & Co. KGaA is one of the world’s leading manufacturers and finishers of glass flacons and caps for the perfume and cosmetics industry. HEINZ-GLAS located in Kleintettau is Germany’s 12th oldest family business, with almost 400 years of family glassmaking heritage.

400 year heritage – The family-owned HEINZ-GLAS company was founded in 1622 in Kleintettau by Hans Heintz. Over the next 400 years, HEINZ-GLAS became one of the world’s leading manufacturers in glass industry. To date, HEINZ-GLAS has been run under the leadership of 13 generations of the Heinz family. Today, the company’s portfolio has expanded beyond glass flacons and caps for the perfume and cosmetics industry, to also include an extensive range of plastic caps, closures and accessorizes produced by HEINZ-PLASTICS. The abbreviation HEINZ stands not only for the family name, but also emphasises the company’s values: History, Excellence, Innovation, Sustainability (german "Nachhaltigkeit"), Future (german "Zukunft").

Throughout its existence, the development of HEINZ-GLAS has gone hand in hand with the history of Kleintettau, forming deep emotional ties between the company and the region. Together with Kleintettau, HEINZ-GLAS faced the Thirty Years’ War, a disastrous fire in 1904, in which the then almost 250-year-old village glassworks burnt down to its foundations, the Great Depression years, the Second World War and finally the most recent shock - the division of Germany – with the East-West border drawn right through the town. All these factors stand behind the cohesion, persistence in achieving goals, fighting spirit and stamina of the HEINZ-GLAS corporate culture.

Putting people first – One of HEINZ-GLAS Group’s key factors for success is the commitment to share company profits with its approximately 3,000 employees. Furthermore, HEINZ-GLAS invests extensively in the training and professional development of its employees Heinz-Glas is not only family-owned but is also managed by the owner family: Mr Carl-August Heinz in the function of CEO and Carletta Heinz as a member of the Supervisory Boards.

Environmentally conscious approach – One of the key aims of HEINZ-GLAS is to raise awareness of the importance of environmental issues. Following this goal, the company is continually reducing consumption of power and water resources and is also limiting CO2 and VOC emissions. The company has several other measures that are aimed at boosting sustainability and ecological prosperity, including the deployment of energy-efficient electric melters, the development of water-based and low-VOC lacquers for spraying process and the use of waste server heat for heating energy. HEINZ-GLAS also uses its remaining waste heat from glass production to cultivate exotic fruit and help raise tropical fish in the tropical greenhouse on the Rennsteig.