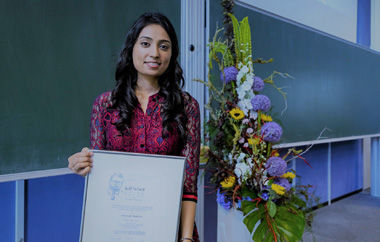 Umarah Mubeen studied Botany at Forman Christian College in Lahore followed by an MSc. in Industrial Biotechnology. She arrived at the Max Planck Institute of Molecular Plant Physiology (MPI-MP) in 2014 for her research stay and completed it so successfully that she was subsequently offered a position as a doctoral student at the International Max Planck Research School (IMPRS).

Umarah received the award for her research on a protein complex involved in the regulation of growth processes. The protein TOR (“target of rampamycin”) is found in animals, fungi and plants and is a central regulator of growth and metabolism in all eukaryotic organisms. Although TOR's signal transduction is well characterised in various animals and plants, little is known about its regulatory function in the growth of photosynthetic organisms. Umarah's research was on the unicellular green alga Chlamydomonas reinhardtii. The alga is one of the most important model organisms scientists study to investigate the processes of developmental biology and physiology in photosynthetic eukaryotes. Umarah's goal was to investigate the molecular and physiological effects of inhibiting TOR. 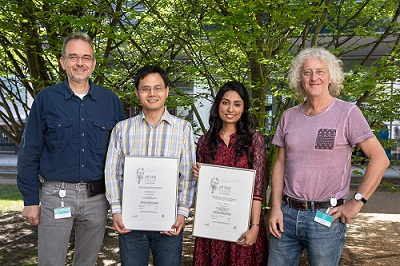 ology, applauds his doctoral student for "her great passion for plant research, which has often led to fruitful scientific discussions opening up new perspectives, not only for her own research topic, but also for other members of the group, making her a very innovative member. She is a hugely talented and dedicated scientist who has been highly independent and self-reliant in performing her research".

As TOR is found in various animals and plants, further work on its function in the alga Chlamydomonas will contribute to closing a knowledge gap spanning yeasts, mammals and photosynthetic organisms, and thus to understanding growth regulation in a huge variety of eukaryotes.

About the Jeff Schell Award

The Award commemorates the Belgian molecular biologist Jozef Stefaan (Jeff) Schell (1935–2003) who revolutionised plant research. He studied zoology and microbiology at the University of Ghent, where he worked as a professor from 1967 to 1995. From 1978 to 2000 he was Director and head of the Department "Molecular Foundations of Plant Breeding" at the Max Planck Institute for Plant Breeding Research in Cologne.

Schell was one of the pioneers of biotechnology. As a microbiologist, he was interested in the interactions between plants and soil bacteria. His research into the origin and development of plant tumours showed that Agrobacterium tumefaciens, a common soil bacterium, can integrate genes into plants. His research has led to the development of techniques to selectively introduce genes into plants.