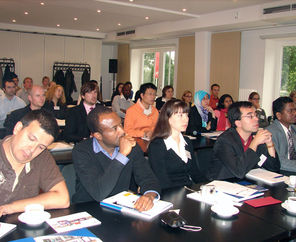 "The general topic of the day is to bring together the “Green Talents”, a group, which was formed within the last week, and some German counterparts, “Green Talents” as well, from Germany," explained Dr. Marc Bovenschulte of VDI/VDE-IT.

A special workshop setting had been created, Bovenschulte said, to have intercultural exchanges and to "set up some ideas for future collaboration and to have some cross-fertilisation". The participants were greeted by Dr. Renate Loskill from the Division for Sustainability in Production and Services of the German Federal Ministry of Education and Research (BMBF). "We offer a partnership to you and other scientists in the world, to find the way to achieve our common goal of sustainability step by step", Loskill said in her opening remarks before outlining the day’s programme.

The BMBF Foresight Process
The day began with an introduction of the BMBF’s Foresight Process, a strategic decision-making process in research and development intended to help to identify emerging future developments at an early stage, to interpret them accurately and to anticipate them. It was presented by Dr. Philine Warnke from the Fraunhofer Institute for Systems and Innovation Research.

"Foresight is not one method but it is something like a set of methods and you adapt it," Bovenschulte explained. "Where are fields where new trends come up? Where are emerging technologies? But especially where were cross-cutting developments? These questions broaden the way of thinking. This was what we did here today and this was also where the impulse for the “Green Talents” came from."

Rethinking the Future
Riel Miller of XperidoX: Futures Consulting picked up the idea of broadening our way of thinking. He spoke about the future of production and consumption patterns. In his presentation he challenged our notions of how we live and work. He pointed out that a true vision of the future would have to go beyond "more fuel efficient, more economical, less polluting" and that we would have to rethink the entire way our economies work.

Following these presentations, the participants got the opportunity to work with what they had learned. They split up into three workshops, which were characterised by lively discussions. The workshops also gave the “Green Talents” and their German counterparts a first opportunity to meet and interact.

After the lunch break, each group presented a review of their respective sessions. "My impression of the “Green Talents” is that they are really innovative, they really want to do something, to take responsibility, to share knowledge, to ask, to be asked," said Lisa Scholten, a German Ph.D. student of the Institute for Wastewater Technology at the Technische Universität Darmstadt. "I think they really enjoyed the atmosphere as well and wanted to take the opportunity to see how we do things in Germany". The “Green Talents” got a chance to do more of that during the Science Dating portion of the programme.

Science Dating
Similar to speed dating, where different potential romantic partners meet in quick succession, the idea here was that the young German researchers would set up presentations of their work in several rooms and the “Green Talents” would get the opportunity to wander from one researcher to the next and to learn more about their work during brief one-on-one chats.

"I met a scientist who does research in the same area as me and from October until December of this year I will be in Dresden and she invited me to her institute," “Green Talent” Natalia Konstantinovna Fisher from the Russian Academy of Sciences in Khabarovsk raved. "Since I am focusing part of my current work on China I am sure I will stay in contact with the Chinese participants," said Lisa Scholten. "And there is another participant from Turkey who is interested in doing part of his research in Germany and, who knows, maybe others as well."

Photovoltaic City Adlershof
The “Green Talents” concluded their visit to Adlershof with a guided tour of the “Photovoltaic City Adlershof.” Once home to the Academy of Sciences of the German Democratic Republic, Adlershof has been turned into a “City of Science, Technology and Media” and is home to 410 companies, 11 non-university affiliated research institutes and six scientific institutes of the Humboldt University of Berlin. The tour of the district focused on photovoltaics and included both buildings, which make use of photovoltaic panels in their design as well as an outdoor site where various PV panel designs are being tested.

A unique opportunity to explore and connect
"During my entire professional career both as a researcher and an engineer, this is the first time I have been given so many opportunities to be exposed to world-class research and research infrastructure," said Dr. Akintunde Babatunde looking back at the “Green Talent” experience. The Nigerian conducts research at the University College Dublin. "It is also the biggest opportunity I have ever had to meet experts in my field of interest as well as various other fields. So it is a combination of factors that make this a particularly fantastic opportunity for me."

Other participants had similar sentiments. "This really showed me that there is a lot of research that is going on in Germany, particularly in the area of environmental technologies," said Dr. Aluwani Nemukula from Durban University of Technology in South Africa. "Also, the interactions and partnerships that we have had with the German participants and representatives of different companies was one the highlights of the whole forum for me". "I like that it was not conventional," said Dr. Kerem Güngör from Abant Izzet Baysal University in Turkey. "We scientists are used to the conference format and this is quite different from that. We travelled from place to place and visited top-notch research institutions, talked with the researchers and we don’t have this opportunity all the time".

The enthusiasm about the places they had visited, the experts they had met and the contacts they had established during their time in Germany, was something that resonated with all participants of the “Green Talent Forum”. They were also inspired by the new ideas they had been exposed to during the various lectures and workshops. "Before coming on this trip, I never knew as much as I know now about Germany," said Dr. Babatunde. "It is truly a land of ideas."

Photos of the symposium