"It all started with an email back in 2014: Dear Mr. Moustakas…I am pleased to inform you that you are one of the 25 winners of the Green Talents Competition 2014. After 2 weeks of travelling across Germany, visiting universities, companies and institutes, meeting experts in my field and making true friends from all around the world, this life changing experience led me to Max-Planck Institute for Chemical Energy Conversion (MPI-CEC) in Duisburg, for my three months Research Stay under the supervision of Dr. Jennifer Strunk. And as I thought that this was the end of this wonderful trip, one year later I got the opportunity to work as a post-doctoral researcher again for Dr. Strunk but now in Leibniz Institute for Catalysis (LIKAT) in the beautiful and picturesque city of Rostock. If you want to experience high level of research, meet interesting people and make new friends then Green Talents is your best choice! Just apply and…you never know!!!"
Nikolaos Moustakas, Green Talent 2014 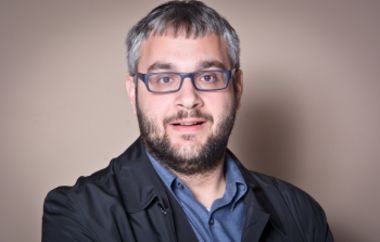 Nikolaos has a keen interest in interdisciplinary research connecting physics, chemistry, and material science. He focuses on designing and synthesising nanomaterials based on metal oxides (e.g., titanium dioxide) and using them as photocatalysts in carbon dioxide conversion into fuels (solar fuels, for example, methane) in a process often referenced in literature as artificial photosynthesis.

Current position: Postdoctoral Researcher at the Leibniz Institute for Catalysis at the University of Rostock (LIKAT), Germany

In his research, Nikolaos tries to understand the underlying mechanism of this conversion and strategically design efficient nanomaterials to carry out this process. With his academic approach, he contributes to solving the energy crisis and tackling the greenhouse effect.

Modifying Titanium Dioxide nanoparticles to make them a more efficient photocatalyst for the conversion of CO2 into fuel, PhD student Nikolaos Moustakas is contributing to an important area of energy research.

Nikolaos’ PhD research project aims to achieve the conversion of CO2 into hydrocarbon chains using modified Titanium Dioxide (TiO2) nanoparticles as a photocatalyst in a process called artificial photosynthesis. “In the same way that plants exploit solar energy, water and CO2 in order to cover their energy needs, or glucose”, says Nikolaos, “we are trying to use light irradiation and water to convert CO2 into long hydrocarbon chains that can be used as fuels”. So far the process of artificial photosynthesis to produce so-called solar fuels has been achieved under UV light, which covers only about 4% of the total solar spectrum. Nikolaos is attempting to modify the process so that it could be carried out under the visible part of the solar spectrum, which would be a huge step forward in the efficiency of the approach.  As Nikolaos says, “if research manages to find a material and a device that can (in an inexpensive and environmentally safe way) efficiently convert CO2 into fuel – we could greatly contribute in solving the energy crisis and tackling the greenhouse effect”.

Describing the importance of artificial photosynthesis for sustainable development, Nikolaos highlights its potential as a two-tiered solution. “Artificial photosynthesis is a ‘green’ procedure, as it uses CO2 – a greenhouse gas – that would otherwise be released into the environment and transforms it into something useful that can be used as fuel. It is an ideal concept that simultaneously combats the greenhouse effect and the energy crisis”. He particularly enjoys working in such an interdisciplinary field, which connects physics, chemistry, material science and chemical engineering. Nikolaos is also conducting other photocatalytic experiments such as using micro-filtration to purify water.

The jury lauded Nikolaos’ innovative approach to this important area of research. His experiment is making a real contribution to its progress and the impact of perfecting artificial photosynthesis could be enormous.