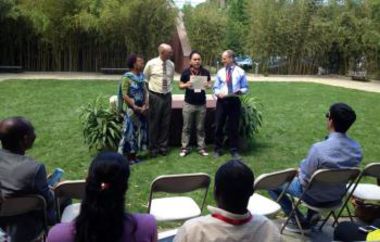 Dr. Joni Jupesta, Green Talent of 2012, was appointed as an Environment Advisor at PT. Sinar Mas Agro Resources and Technology (SMART) Tbk in Jakarta, Indonesia, and as a Visiting Research Fellow at the United Nations University in Tokyo, Japan since 2013. Prior to that, he joined the United Nations University Institute of Advanced Studies (UNU-IAS) as a PhD Fellow in September 2010, continued as a Postdoctoral Fellow in October 2010 and became a JSPS UNU Postdoctoral Fellow and a Visiting Scholar at The National Graduate Institute for Policy Studies (GRIPS) in Tokyo, Japan in September 2011. He received several awards for his research work in innovation for sustainability (e.g. as described in earlier article: http://www.greentalents.de/news-media_news_and-the-winner-is.php).

Recently, Joni was furthermore appointed as a research fellow of the Earth System Governance Project, one of the largest networks of scholars in global environment governance. He was selected to participate in a two-week training for young scholars and practitioners with the theme “Connections and Flows: Water, Energy, and Digital Information in the Global South” at the Brown International Advanced Research Institute (BIARI) programme of Brown University in Providence, US. Based on his research work, he published several articles discussing sustainability across sectors (energy, agriculture and forestry) and scales (country, city). One article elaborated on the energy security in Japan in the East Asia Forum titled “Illuminating Japan’s energy future” as well as another one concerning “Green Investment in Asian Cities to Reduce Natural Disaster Risks” in Our World magazine. Concerning energy and financial access, he moreover wrote for the IAEE Energy Forum on “Using Biogas from Palm Oil Residues to Enhance Energy Access in Indonesia” and for the Strategic Reviews journal on “Innovative Financing for Palm Oil Farmers”. The latest article on how to leverage the role of business sector in sustainable development will be presented on the International Conference: Future perspectives on innovation and governance in development at the United Nations University – Maastricht Economic and Social Research Institute on Innovation and Technology (UNU-MERIT) in Maastricht, The Netherlands.