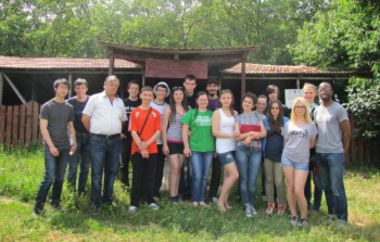 The CURIOS initiative was started by two Green Talents and aims at becoming a global movement with an international community of young changemakers engaged in conserving the natural and archaeological heritage of the world.

The CURIOS initiative was started by Alexandr Iscenco from Moldova and Divya Pandey from India during the Green Talents Science Forum in 2013. The main goal of the initiative is to educate young people about natural processes through in-field demonstrations to complement their academics and interest and to generate massive awareness towards conservation of structures and knowledge with special emphasis on:

1.  Sites of natural or environmental importance and unique ecosystems.

In Moldova CURIOS is organized by the Moldovan Environmental Governance Academy (MEGA) and supported by Ashoka ChangemakerXchange as well as the Robert Bosch Stiftung.

In June 2014, MEGA organized the first edition of the project CURIOS that took place in Moldova. Two organizers, three trainers and 15 young people from Chisinau, Balti and Comrat in Moldova, as well as from Canada and the US, gathered together to explore the natural and historical beauty and uniqueness of the Republic of Moldova. The whole experience took form in an excursion with tents, during which young changemakers obtained knowledge and capabilities on how to protect sites of natural and environmental importance in a sustainable manner.

The first stop of the journey was the well-known natural heritage site in Moldova called Orheiul Vechi (Old Orhei). Here the young people observed the unique ecosystem of the Nistru / Dniester river, learnt about environmental services from the US trainer Michael, explored the churches and cave monasteries of Old Orhei, got to know about archaeological findings there and experienced sleeping in tents under the starry sky.

After Old Orhei the participants went further to the north of Moldova to the region Drochia. There they observed the iconic beauty of the Drochia Church, visited the Farmer Museum, got their hands on photovoltaic installations, tried the eco-friendly toilet, made photos in traditional Moldovan costumes and drank naturally purified water from the Great Spring.

The last two days of the excursion were spent in Soroca, Costesti Stanca and the village Pirjota. The future agents of positive change admired the monumental strength of the Soroca Fortress and the height of the Soroca Candle, enjoyed the view of the Costesti Lake and the Hundred Hills and experienced the rural life in Moldova by staying overnight in the village Pirjota. The excursion ended at the Moldovan resort town Vadul-lui-Voda, where the participants remained for a summer school on social / environmental entrepreneurship.

During the whole CURIOS Moldova project the trainers from the organizations MEGA, Peace Corps and AIESEC used the concept of gamification and accelerated learning to educate young people about how to make positive change and launch social / green business in Moldova. The participants benefitted from such trainings as The Beauty of the Earth, Environmental Footprint, Voice of Mother Nature, Licence to Lead, etc.

Scaling Up CURIOS-ity:
CURIOS Moldova in 2014 was only the pilot project aimed to test the concept and build up the basis of its community. Next steps include scaling it up to India, realization of CURIOS India in 2014 – 2015, expansion to Germany and further on. The scaling up process is based on the “pay it forward” concept, where the participants of the current edition will become the organizers of the next one on a larger scale and so on.