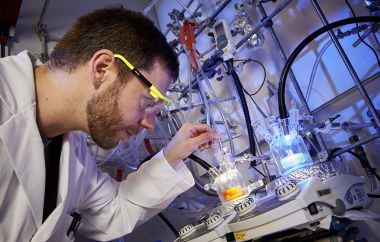 Catalysis is the science of accelerating chemical transformations. By using high-performance catalysts, chemical reactions can be carried out in a resource-saving manner, for example by increasing the yield, avoiding by-products and reducing the specific energy requirement. Catalysis is crucial for sustainable development. The Leibniz Institute for Catalysis is one of the largest publicly-funded research institutes in Europe in the area of applied catalysis.

In 1952, the Institute for Catalysis Research in Rostock was founded, the first research institute in Europe to be dedicated solely to catalysis. This institute and decades of catalysis "know how" in Rostock form the basis for today's Leibniz Institute for Catalysis at the University of Rostock (LIKAT Rostock), which now counts over 300 employees, including a number of guest researchers. A major goal of the scientific work at LIKAT is the elaboration of new knowledge in basic research in all areas of catalysis as well as the transfer of this knowledge into technical applications. The institute therefore builds bridges between research on one side and industry on the other side.

To an increasing degree, applications of catalysis – apart from their use in chemistry – can also be found in the life sciences and in the sourcing of energy, as well as the protection of the environment. The LIKAT is dedicated to many fields of catalysis research, always focusing on reducing the specific energy consumption of a reaction and the efficient use of all resources.

One important field of research is catalysis for energy. Besides hydrogen generation and storage the direct usage of carbon dioxide also plays an increasing role for the sustainable application of the fluctuating renewable energy sources wind and sunlight. Based on that, carbon based energy rich materials and industrially relevant intermediates like carbon monoxide, formic acid, methanol, methane and others can be synthesized.

Another group works on Artificial Photosynthesis: The sunlight-driven conversion of CO2 and H2O to products such as methane or carbon monoxide, a process often termed as "artificial photosynthesis" could be a milestone for the re-integration of the greenhouse gas CO2 into chemical production. It is already known that such reactions are in principle feasible. However, achievable yields are far too low for industrial application, and a deeper insight into the reaction mechanism is still lacking.

Research is also done on the development of new chemical processes for the production of existing as well as new chemicals based on renewable resources. The main new raw materials which are looked into are lignocellulose and its components (cellulose, hemicellulose and lignin), CO2, and fatty acids. Especially important is the sustainable production of so-called platform chemicals. It is desirable to produce them in a single step from these renewable resources. The aim is to convert these platform chemicals into high-value chemicals and raw materials for polymers. Homogeneous catalysis will be used for these conversions.

Another important approach deals with the development of novel catalytic procedures and synthetic methods based on catalysts made from organic compounds or from common metals instead of rare metals. As a result, processes can be designed more favourable and sustainable.

The research and work of the Leibniz Institute for Catalysis mainly contributes to the Sustainable Development Goals 7, 9, 12 and 13.