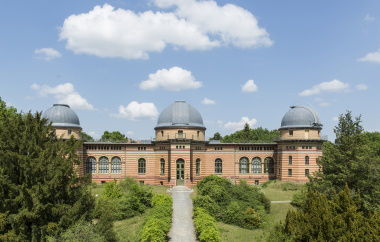 The results of the Institute's work form the basis for decisions in the political arena and society at large. Not only the German federal government and the EU Commission, but also other national governments and international institutions such as the World Bank, draw on the expertise of the Potsdam Institute for Climate Impact Research.

There are some 300 staff working in the historic buildings of the Potsdam Institute for Climate Impact Research (PIK) on the Telegrafenberg campus in Potsdam. The researchers in natural and social sciences from all over the world are interested in global climate change and its ecological, economic and social impacts. One of the Institute’s special features is the interdisciplinary approach between the four research departments: Earth System Analysis, Climate Resilience, Transformation Pathways, and Complexity Science.

Another feature is the solution-oriented approach of the work of the institute: scientists at PIK are investigating the capacity of the Earth, as a system, to withstand human intervention. Their goal is to come up with strategies and options for the viable and sustainable development of nature and humankind. Their tools include system and scenario analysis, quantitative and qualitative modelling, computer simulation and data integration.

Understanding climate change and its impacts is a task no institute or country can meet alone. That is why PIK is superbly integrated, both nationally and internationally. In Germany, it is one of 96 scientific institutions that make up the Leibniz Association, an organization whose members seek to build bridges between the humanities and social sciences on the one hand, and the natural, life and engineering sciences on the other.

But PIK is also a key player in many global research networks working on questions of global environmental change such as the Earth League – an international alliance of prominent scientists from world‐class research institutions – or the German Sustainable Development Solutions Network (SDSN). Scientists from PIK play an active role in the assessments of the United Nations' Intergovernmental Panel on Climate Change (IPCC). In addition, since 2007 PIK has hosted several Nobel Laureates' symposia devoted to questions of global sustainability.

The research and work of the Potsdam Institute for Climate Impact Research mainly contributes to Sustainable Development Goal 13.