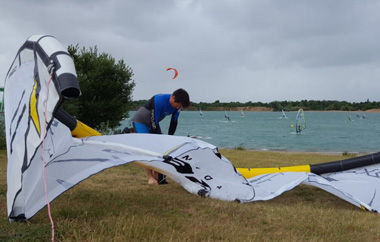 Brett Hallam is a postdoctoral fellow in Photovoltaic Engineering at the University of New South Wales in Australia and his objective ist to find a green solution for sustainable electricity. He received the Green Talents award in 2016 and conducted his three-month research stay under the supervision of Dr Markus Glatthaar at the Institute for High-Efficiency Silicon Solar Cells and Novel Processes at Fraunhofer ISE in Freiburg. 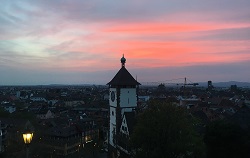 Life is pretty nice when you can have three summers in a row and skip winter, and even better when at leastone of them is in Europe! The Green Talent Research Stay allowed me to do just that! After meeting three experts in the field of photovoltaics in 2016 as part of the two-week Green Talents Tour, I selected the Fraunhofer Institute for Solar Energy Systems (ISE) for my Research Stay, which is based in a beautiful city called Freiburg in the south of Germany. Luckily for me, it turns out Freiburg is one of the sunniest places of Germany, and perfectly suited for researching photovoltaics.

The three-month research stay was simply an extension of an amazing experience in 2016, meeting the 25 Green Talents from around the world, making new friends and learning about research efforts in Germany for sustainable development beyond photovoltaics. I was working with Dr. Markus Glatthar in the Silicon Solar Cell division, led by Prof. Stefan Glunz from June-August. I was looking at developing a process to electropolymerize PEDOT: PSS, or poly(3,4-ethylenedioxythiophene):poly(styrenesulfonate) for those of you who are interested, just don’t ask me to pronounce the full name, chemistry isn’t my thing! We were looking at using this to form a self-aligned passivated contact structure as a low-cost p-type electrode for silicon solar cells. But, like many projects, you often come across strange and unexpected results that can often shift the focus of the work. This research experience was no exception. The electropolymerization proved challenging, and when studying control samples with spin-on coatings of commercially available PEDOT:PSS solutions, we came across a number of observations that haven’t been reported for these films for solar cell applications so far. From this, I’m preparing a manuscript for a peer-reviewed journal. I was also able to establish some collaborations with researchers in other areas of Fraunhofer ISE that will form part of an on-going collaboration between the University of New South Wales (UNSW) and Fraunhofer ISE as part of a program that is funded by the BMBF. I was also able to present this work in Amsterdam at the opening of the Collaboration Cluster for Photovoltaic Silicon Material Characterization (CCPV) program. 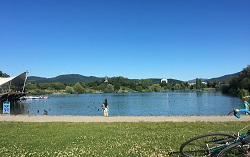 The research stay opened up a whole lot of other opportunities beyond working in Germany. I was able to improve my German and experience some more German culture, visit a number of cities to see some of my favourite German artists perform live and even attend the wedding of a friend in Köln (Cologne). I made a large number of friends at work and beyond. It was also a big change going from living in a three-bedroom house in Sydney with only one flatmate (who happens to be German), and hence a spare room, to a WG with nine flatmates with ages ranging from 20 to 50+. I guess this was the university experience I never had as a student living in a large share-house. Nonetheless, it was really good, surprisingly good! We often spent evenings watching the Fußball or having a beer at Seepark  (the lake near our house) or a BBQ in the backyard after cleaning or attending the many festivals in the town such as Weinfest at the Münster. 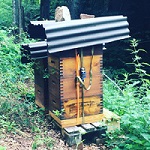 The nature around Freiburg is incredible. Everything is so green! Although for me it meant a lot of allergies. Nonetheless, I did take the opportunity to go hiking in Schwarzwald (the Black Forest) and see some German-engineered beehives.  As a beekeeper, my grandpa was certainly impressed. Then there are the fresh, juicy-red strawberries, of which I consumed many punnets worth. There were a number of lakes in the town that meant I could go swimming outside every day after work, one of which was a five-minute walk from my house.

Coming from Australia, the distances in Europe, or lack thereof, always amazes me. Being able to walk to work in less than 15 minutes was really relaxing, compared to at least 25 minutes (without traffic) in Sydney to drive to work. Sydney could learn so much from Freiburg (and other German cities) in relation to the efficiency and adequacy of public transport in Germany. I was also able to take a two hour train ride to get to Switzerland after work on a Wednesday to see a friend from Finland and be back for work in the morning, or an overnight bus to Belgium through France and Luxembourg to go kitesurfing over the weekend.

My Green Talent Research Stay has been such a great experience. It was a shame it ended so soon. But, I have already organised my next visit to Fraunhofer ISE in March next year, and am currently preparing a Humboldt Society Fellowship application for a longer stint at Fraunhofer ISE.

I would like to say a massive thankyou to the BMBF and the Green Talent program for funding an amazing opportunity, my flatmates at ´Am Eichbächle`, as well as the team at Fraunhofer ISE for making my research stay such a wonderful experience. Vielen Dank und bis bald!