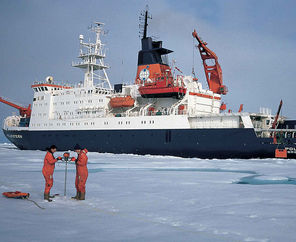 The institute coordinates polar research in Germany and provides key infrastructure for national and international scientists.

Research under extreme conditions
From the North Pole to the South Pole; from shallow waters to the deep sea: The Alfred Wegener Institute for Polar and Marine Research (AWI) has been conducting research in the Arctic and Antarctic as well as in temperate latitudes for now 30 years. The institute coordinates polar research in Germany and provides key infrastructure for national and international scientists. Examples include the research icebreaker Polarstern, which is currently the world's most sophisticated polar research vessel, a polar aircraft, and research stations in the Arctic and the Antarctic, including Neumayer-Station III.
The AWI is member of the Helmholtz Association of German Research Centres and headquartered in Bremerhaven. Other locations include the Potsdam Research Unit, the Biological Institute Helgoland, and the Wadden Sea Station Sylt. The Alfred Wegener Institute advises the Federal Government on environmental policy issues.

International and interdisciplinary cooperation
What will happen if the ice at the polar caps continues to melt? How will this affect humankind and nature? Researchers at the AWI are trying to answer these and other questions. Currently, the framework for ongoing scientific projects at the Alfred Wegener Institute is provided by the research programme PACES (Polar regions and Coasts in a changing Earth System). Researchers from different disciplines and countries are working together to investigate man-made and natural changes in the global environment and the earth system.

Worldwide network to meet global research challenges
Since it was founded in 1980, the AWI has been involved in numerous national and international collaborations, making it part of a global research network. AWI ist home of several coordinating offices of international projects and committees as for example the coordination of the Integrated Ocean Drilling Programme and the World Radiation Monitoring Center, the secretariat of the International Arctic Science Committee and the International Permafrost Association. It also works together with the Otto Schmidt Laboratory for Polar and Marine Research (OSL), which is based in St. Petersburg. In addition to joint research projects, this partnership also focuses on training and supporting young scientists.