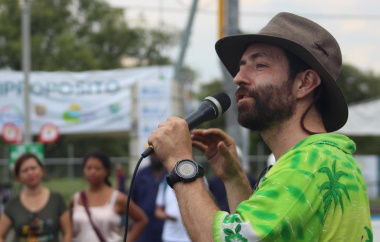 The PV4 home, designed and built by UNOA team (Universidad Nacional Open Architecture), was awarded the first place in the comfort contest in the most important academic competition on sustainable and innovative housing during the second version of this event in Latin America. The proposal stood out with its dual comfort strategy that combined bioclimatic and passive measures to keep temperature and relative humidity stable in tropical climates as well as optimal noise insolation and natural lighting performance. The house proposal was also awarded the second place in the house functioning contest, third place in universal design to address limited mobility, and honorable mention in the communication contest, awarded to the team that best communicated sustainable housing principles and identity to the community.
Professor Andrés Ibañez led UNOA team at National University of Colombia. The team had 65 students from 16 different undergrad and graduate programs. The PV4 Home design embraces 4 key concepts on sustainable housing: 1) a polivalent space that users can set via movable partitions walls, so that the house can be customized up to 32 different space settings, 2) a structural system that liberates the central space from columns (post-vierendeel) , 3) a photovoltaic system that harvests solar energy via 8 high-efficiency monocrystalline panels, and 4) productive vicinities that create environmental services in the urban block.
The Solar Decathlon competition is organized by the Department of Energy of the United States. This version was held in Cali, Colombia in December 2019, in which 9 teams from the U.K., Germany, Italy, Brazil, and Colombia participated.

More information (only in Spanish):

Professor Andrés Ibañez led the biomimetic design team Eco-incremental Lab at Pontificia Universidad Javeriana. The team was awarded the first place in the Global Biomimicry Challenge 2019 with a solution to flooding in cities which was inspired in water performance in bryophyte plants.
Páramo is an alpine tundra ecosystem exclusively located in the Northern Andes of South America and the home to the bryophytes that a team from Bogota, Colombia were inspired by in developing their concept, Bryosoil. Bryosoil is a flood prevention system that took the first place prize for student teams in the 2019 Biomimicry Global Design Challenge. As the effects of climate change continue to be exacerbated and sea levels continue to rise, many communities worldwide are now dealing with worsening flood situations. Four of the finalist teams in this year’s Challenge address flooding, including team Limonene Pods. This team focused on the issue of debris flow that occurs during fire and flood cycles in their home state of California.
Bryosoil is a modular and multi-functional soil system that uses 3 geometric patterns found in bryophytes to help prevent floods and fight the heat island effect. It catches water from a flooding event and manages it, depending on the risk. It is composed of 3 layers that perform 5 functions: it slows down the flow, redirects it, infiltrates the water into natural soil, harvests stormwater, or evaporates it. These layers replace the existing paradigm of water management that is based on pipe systems.