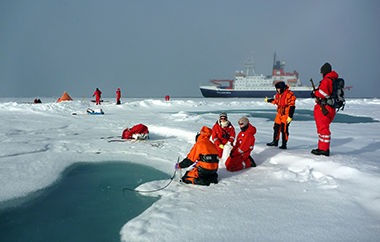 The Alfred Wegener Institute (AWI), named after the German polar explorer who discovered continental drift, was first launched in 1980. It is part of the Helmholtz Association, the largest scientific organisation in Germany. As Helmholtz Centre for Polar and Marine Research, the Alfred Wegener Institute is primarily active in the cold and temperate regions of the world.

The organisation works together with numerous national and international partners, and is actively involved in unravelling the complex processes at work in the World’s “Earth System”.

The institute coordinates German polar research and is one of the very few scientific institutions in the world that are equally active in the Arctic and Antarctic. However, it also conducts research in the North Sea and adjacent coastal regions in Germany. Above all, the goal to understand the driving forces and the fluctuations in climate processes has increasingly become the major focus of research.

Excellent Research – With an overall staff of more than 1,000 people, and a wide range of natural science disciplines, the Alfred Wegener Institute explores nearly all components of the Earth System. Experts from the bio-, geo- and climate sciences work closely together. They research the atmosphere, ice, oceans and coasts, explore the deep seas, glaciers and permafrost soils, or analyse data from climate archives like sediment and ice core samples. Field research under extreme conditions is just as much a part of the Institute’s day-to-day work as are analyses using cutting-edge laboratory equipment and high-performance supercomputers. Various observatories gather data over long timeframes.

High-Performance Infrastructure – Because polar and marine research always constitutes a logistical challenge, the AWI also maintains an excellent infrastructure, allowing it to make resources available for the national and international research communities. It provides research vessels, such as the internationally known "Polarstern", scientific, aircraft as well as annually and seasonally staffed research stations in both Polar Regions. Several portals have been developed as a tool for data sharing, such as the Expedition – a framework for discovery and re-use of various types of georeferenced expedition-related content (reports, publications, track lines, stations, datasets, and data products) associated with AWI research platforms, here in particular the research vessels Polarstern and Heincke. Research vessel Heincke, operates in the North Sea and in the North Atlantic.

Research for Society – Among the institute´s tasks is serving as an advisory function for political decision-makers and society at large, e.g. by participating in the preparation of the latest climate reports from the Intergovernmental Panel on Climate Change (IPCC). Pursuing research in the Polar Regions and oceans also goes hand-in-hand with the development of technological innovations. Last but not least, the Alfred Wegener Institute is continually engaged in the education and training of young researchers, students, pupils or trainees.