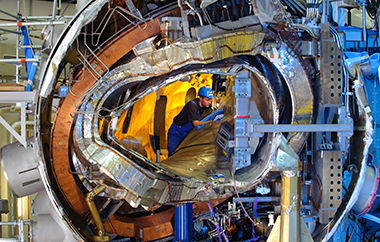 The Max Planck Institute for Plasma Physics (IPP) is a German research institute with two sites in Garching near Munich and Greifswald in the North-East of Germany. IPP is investigating the physical basis for a fusion power plant.

Similar to the sun and other stars, the objective of such a plant is to generate energy from the fusion of atomic nuclei. This requires a highly complex process where the fuel, an ionized low-density hydrogen gas called plasma, has to be confined in a magnetic field cage and heated to ignition temperatures of over 100 million degrees.

After the beginning of research in the 1950ies, it became obvious that for the development of fusion technology, extensive fundamental research was necessary in order to understand the complicated processes in the plasma. After its foundation in 1960, the IPP took an active part in driving development forward: While the first experimental devices were a factor of 50 million short of the plasma values needed for a power plant, today’s devices are only missing one order of magnitude.

The goal is to ultimately use fusion power as a replacement for fossil sources of energy, which cover over 90 Percent of the worlds energy needs. However, as fossil sources of energy are limited and often linked to political instability, a new efficient and more climate-friendly source of energy will be indispensable in the future. That is why the IPP is exploring fusion as a new long-term energy source.

The Greifswald institute is home to the “Wendelstein 7-X”, the world’s biggest fusion reactor model of the type “Stellarator”. It examines the suitability of Stellerator reactor power plants by testing the inclusion of plasma by means of an optimized magnetic field. This magnetic field is generated by 50 specially crafted, superconducting coils.

With a workforce of approximately 1100 employees in Garching and Greifswald, the IPP is one of the largest fusion research centers in Europe. Funded by the Federal Republic of Germany, the federal states Bavaria and Mecklenburg-Vorpommern as well as the European Union, it is also part of the European Fusion Research Program.