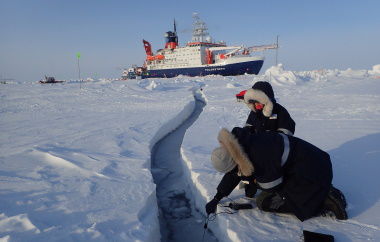 The Alfred Wegener Institute is primarily active in the cold and temperate regions of the world. Together with numerous national and international partners, it is involved in unravelling the complex processes at work in the “Earth System”.

The climate change affects the polar regions and at the same time, they play a central role in the global climate system. How will planet Earth evolve? Do the observed phenomena represent short-term fluctuations or long-term trends?  Polar and marine research has always been a fascinating scientific challenge. Today, it is also research into the future.

The Alfred Wegener Institute, Helmholtz Centre for Polar and Marine Research (AWI) is located in Bremerhaven, Germany, with sites in Potsdam, on the islands of Helgoland and Sylt and in Oldenburg and is a member of the Helmholtz Association of German Research Centres. It conducts research in the Arctic, the Antarctic, and the high and mid latitude oceans focussing on biological, geoscientific and climate research.

Combining innovative approaches, outstanding research infrastructure and years of expertise, the Alfred Wegener Institute explores nearly all aspects of the Earth system – from the atmosphere to the ocean floor. In this regard, initiatives to better grasp the climate-related processes have increasingly taken centre stage. The AWI’s researchers operate various observatories that gather measurement data over longer timeframes. They research the atmosphere, ice, oceans, and coasts. They explore the deep seas, the glaciers, and the permafrost soils of the polar regions first-hand. And they analyse data from climate archives like sediment and ice core samples.

The Institute’s work is characterised by a high degree of international and interdisciplinary collaboration: experts from the bio-, geo-, and climate sciences work closely together at the AWI. Field research under extreme conditions is just as much a part of the Institute’s day-to-day work as are analyses using cutting-edge laboratory equipment and high-performance supercomputers. The AWI also maintains an excellent infrastructure including several research ships, aircraft, and stations in the Arctic and Antarctic.

Serving in an advisory function for political decision-makers and society at large is also an important aim. Researchers from the Alfred Wegener Institute have participated in the preparation of several of the IPCC’s annual Assessment Reports – also assuming leading positions. The administrative office of the German Advisory Council on Global Change (WBGU) is affiliated with the AWI. Further, the institute coordinates the Helmholtz Initiative for research on regional climate change (REKLIM) and is a member of the Helmholtz Climate Initiative.

The research and work of AWI mainly contributes to the Sustainable Development Goals 13 and 14: