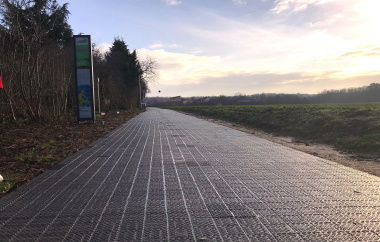 SOLMOVE aims to turn roads into large-scale power plants that are climate-neutral thanks to the generation of electricity from sunlight. Their technology is based on photovoltaics combined with an innovative glass surface that can be connected to sealed surfaces. The electrical energy is then stored in built-in rechargeable batteries. Solmove modules use a robust glass resistant to thermal influence with a ceramic anti-slip coating which is fused to the solar glass. In the future, Solmove aims to use their technology to charge e-cars driving on the road through electromagnetic induction strips, a form of wireless energy transmission.

With Fraunhofer Institute for Solar Energy Systems (ISE) and RWTH Aachen involved in the development and adjustment processes, Solmove has already realised several successful pilot projects and is currently working on the implementation and marketing on a large scale. The company has received numerous awards and is partly financed from public German and EU funds.

The research and work of SOLMOVE mainly contributes to the Sustainable Development Goals 7, 9, and 11: