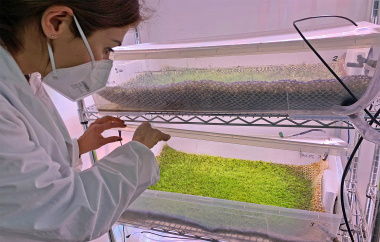 Making the air in urban areas cleaner is the aim of Green City Solutions, a Berlin-based start-up. It is a greentech pioneer that develops, produces and sells biotech filtering devices to remove fine particulates from the air. Particulates are the most harmful form of air pollution causing health problems such as respiratory diseases, heart attacks, and premature deaths.

In their devices, called CityTrees, they combine the natural ability of moss to clean and cool the air with Internet of Things technology to control irrigation and ventilation. In March 2014, Green City Solutions GmbH was founded by Peter Sänger and his friend Liang Wu in Dresden. They set up a team of young experts from the fields of horticulture/biology, computer science, architecture, and mechanical engineering. The knowledge of the individuals was bundled to realise a device that combines nature and technology: the CityTree.

The living heart of CityTrees is moss cultivated on hanging textile mats. The moss mats are hidden behind wooden bars that provide sufficient shade for these plants, which naturally grow mainly in forests. Sensors are measuring various parameters such as temperature, humidity, and concentration of particulates. This data is used to regulate ventilation and irrigation. Behind the moss mats are large vents that create an airflow through the moss. In this way, the amount of air cleaned by the device can be increased when pollution levels are high, such as during rush hours.

Green City Solutions collaborates with several partners in Germany and abroad. Scientific partners include the Leibniz Institute for Tropospheric Research (TROPOS) and the Dresden University of Applied Sciences (HTW Dresden), both located in Germany. Green City Solutions has been awarded the Seal of Excellence by the European Commission. This is a European Union quality label for outstanding ideas worthy of funding.

The work of Green City Solutions mainly contributes to the Sustainable Development Goals 3, 11, 13, and 15: