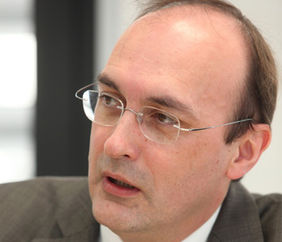 Rik De Doncker gained his doctorate in electrical engineering with the highest distinction in 1986 at the Katholieke Universiteit Leuven, Belgium. Over the following years, research grants and guest professorships took him to the University of Wisconsin in Madison as well as to the Interuniversity Microelectronic Center (IMEC) in Leuven.

Further positions followed, both in industry and universities, including a position as a senior scientist at GE Corporate Research and Development Center in Schenectady/New York. He also held the position of Vice President of the Silicone Power Cooperation in Malvern/Pennsylvania.

In 1996, Rik De Doncker came to the RWTH Aachen as a professor and head of the Institute for Power Electronics and Electrical Drives (ISEA). In 2006 he was appointed as director of the E.ON Energy Research Center, which is also located at the RWTH Aachen.

In addition to his activities in teaching and research, Rik De Doncker carries out important functions for organisations. Among other things, he is a member of the board of directors of the Power Engineering Society within the Electrical Engineering Association (VDE). He has also held management positions in the Institute of Electrical and Electronics Engineers (IEEE) and is a member of the Executive Council of the European Power Electronics and Drives Association (EPE).

„In the context of limited resources and the changing climate sustainability is one of the key issues to ensure future quality of life on our planet. The “Green Talents”-competition is encouraging young researchers to work in this field and therefore an important lighthouse project for sustainability development.“