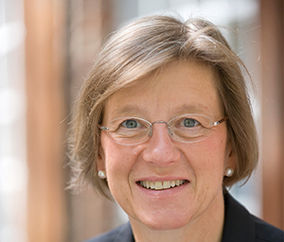 Director of Deutsche Bank, and Chairwoman of the German Council for Sustainable Development (RNE)

As the director of Deutsche Bank, Marlehn Thieme is a leader and influential force in the German business world. In 2012, Mrs. Thieme also became the Chairwoman of the German Council for Sustainable Development, in addition to being a Member of the Council of the Evangelical Church (EKD) in Germany.

Marlehn Thieme studied law and social sciences in Freiburg and Bonn. After graduating, she embarked upon a traineeship at the Deutsche Bank in Remscheid, Wuppertal, and Milan. She quickly moved up to the central personnel department of the company before becoming Managing Director of the Deutsche Bank Alfred Herrhausen Foundation "Help towards Self-help". In 2001 she moved to Private Banking, as Manager of Marketing, Inheritance and Foundation Management. Two years later her responsibilities further increased as she moved into Private Wealth Management.

As Chairwoman of the German Council for Sustainable Development (RNE) Thieme helps advise the German government on its sustainability policy, by presenting proposals and projects in order to realise the sustainability strategy. In addition, the RNE seeks to foster social dialogue on related issues. Mrs. Thieme has been a board member of the RNE since 2003.

“For more sustainability research and science are essential. New techniques and engineering are important and require broad knowledge about modes of operations and correlations. To find sustainable solutions we have to go one step further: we have to imply the guiding principles of a culture of sustainability to come in our questions.”