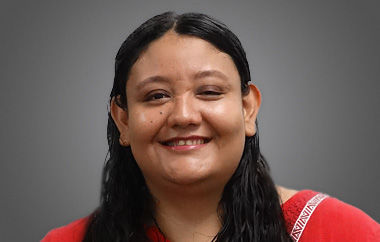 Itzel is working on microalgae applications for solving environmental concerns. She is researching how microalgae can be used to produce bioplastics without compromising the nutrition of the world’s growing population, while also remediating wastewater and reducing CO2.

Itzel’s PhD thesis focuses on the production of bioplastics using microalgae biomass produced in bioremediation processes, in particularly using starch and triacylglycerol. The use of microalgae is suitable because they are not a food crop for humans, which to date is one of the major problems in the production of bioplastics, as many of them are produced with corn or soybean. The use of microalgae can also capture CO2, as microalgae are photosynthetic microorganisms that use it for growth, and by-products or valuable products can also be obtained from biomass produced.

Timely treatment of wastewater is a problem that has not yet been resolved, despite the large installation capacity of wastewater treatment plants. The use of microalgae for wastewater treatment helps to reduce the amount of organic matter and capture metals and contaminants. On the other hand, finding carbon capture technologies is crucial for reducing greenhouse gas emissions in the world. The use of microalgae, which have a higher capture rate than trees and can be produced in different types of reactors, can be an option for capturing CO2 in industries, cities, and other spaces. In addition, this research aims to produce in an environmentally sustainable way by extracting a by-product from a waste that has already been produced by another anthropogenic process.

As part of her research, Itzel conducted a case study on the potential for cities to use microalgae carbon capture. This study looks at using wastewater treatment plants and parks to install microalgae reactors that can capture carbon. Based on the data collected, she found that carbon neutrality could be achieved through the use of microalgae even for megacities such as Mexico City.

Itzel is working on the production of bioplastics from microalgae, wastewater remediation, and CO2 reduction. Due to her very interdisciplinary work, which includes both basic research and very application-oriented work, this very dedicated scientist was selected by the jury as a Green Talent.

The research of Itzel mainly contributes to the Sustainable Development Goals 6, 12, 13:

Take a look at this video that briefly introduces Itzel and her research: