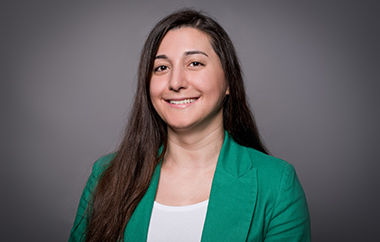 Govhar Valiyeva’s research focuses on reducing the amount of heavy fuel and gas by implementing alternative and renewable sources of energy. She mainly focuses on including energy sources from neighbouring countries in her work. Through this, she supports the sustainable development in Azerbaijan, whilst also aiming at giving new perspectives for other countries.

Azerbaijan is one of the world’s oldest oil-producing countries and a region rich in fossil oil and gas. The majority of the electricity produced in Azerbaijan derives from heavy fuel and gas, with only a small part coming from hydroelectric power stations. Renewable and alternative energy sources account for less than 1 percent. This is why Govhar draws attention to alternative sources for existing energy resources in her research, which can be used more efficiently and sustainably than their substitutes. She places an emphasis on existing energy measures in Azerbaijan as well as alternative sources in neighbouring countries such as Georgia.

In her research, she also aims to introduce new technologies and develop the energy trade with Georgia, as the neighbouring country generates a major part of its energy production from hydropower plants. Govhar believes that these aspects will contribute to a sustainable future and allow the reduction of heavy fuel and gas burned in Azerbaijan. She further assumes that the energy trade with Georgia would create additional revenues and currencies for Azerbaijan, leading to a positive impact on economic, social and environmental processes. Furthermore, she predicts declining energy tariffs, which the population would benefit from. Her approach of implementing energy efficiency measures and new technologies will reduce CO2 emissions in her home country. With her research, Govhar attempts to provide a model that deals with efficient utilisation of energy resources such as hydropower and which can be transferred to other countries. Therefore, she hopes to further expand her knowledge during the Green Talents Science Forum and develop studies that ensure the sustainable use of energy in the world.

The jury commended her long-term orientation towards development opportunities for regional energy trade that reduces greenhouse gas emissions. They further acknowledged her idea that the transportation of the saved natural gas to the European market can lead to the replacement of coal as a source of energy. Finally, they appreciated Govhar’s model for the efficient utilisation of resources that ensure a sustainable and green future.