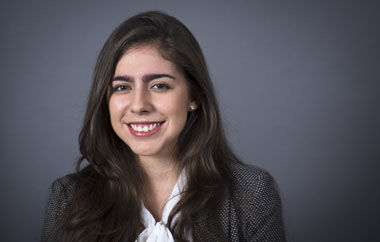 Marina believes that one of the main contributions she has provided to sustainability research is the promotion of the exchange between law and agroecology in Brazil, raising awareness about relevant issues.

Currently, Marina is also an international consultant at the Food and Agriculture Organisation of the United Nations in Rome. She is working for the Climate, Biodiversity, Land and Water Department, at the Biodiversity Mainstreaming Platform, providing technical policy support to the Platform’s work on the integration of biodiversity across agricultural sectors and engagement in the Convention on Biological Diversity’s processes.

CV as submitted for the Green Talents award (2016):

The 21st century is marked by an environmental crisis. This poses new, intricate challenges and complex problems with extensive social, political and economic implications. After thorough research, Venancio highlights that hunger, malnutrition and food insecurity are only a few examples of the many issues that are currently demanding innovative interdisciplinary and integrated approaches and solutions within the context of a rapidly changing global society.

Venancio’s master’s research deals with the interconnections between climate change, agriculture and food systems from a legal perspective, focusing on Brazilian agroecological public policies. Venancio’s main goals are, among others, reviewing Brazilian environmental hermeneutics in light of the new paradigm set by agroecology and food security in terms of organic ecological production. She adds, ‘One of my biggest concerns has always been to incorporate multi-disciplinarity, inter-disciplinarity and trans-disciplinarity into my research agenda’. Venancio believes that one of the main contributions she has provided to sustainability research is the promotion of the exchange between law, a subject that is known for being too specialised and compartmentalised, and agroecology in Brazil, raising awareness about relevant issues.

Venancio obtained experience volunteering and working as a legal intern at the State Public Prosecutor's Office of Santa Catarina, at the Brazilian non-profit organisation, Law for a Green Planet Institute and at the Environmental Law and Ecological Politics Research Group. Despite her young age, her monographs and peer-reviewed articles can be found in 10 books and journals published between 2014 and 2016. She also began work on her own publications concerning agroecology, Brazilian energy and environmental policies, disaster law and the world risk society in 2012. Likewise, it is relevant to point out that she published a book related to the legal protection of agroecology in Brazil in 2015. She explains, ‘One of my biggest motivations in publishing my work was to call attention to topics that are rarely debated in the legal world, such as agroecology and family farming rights’.

The jury noted Venancio’s strong research and publishing experience in climate change. They are sure that the Green Talents forum will strengthen her research, bringing new ideas and establishing valuable partnerships with likeminded professionals.