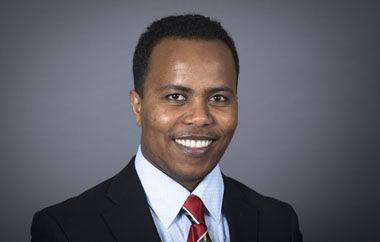 Through his interdisciplinary research, Tegegne Wondowossen aims to establish cooperation between the realms tourism, agriculture and nature conservation in the face of growing climate change. In his PhD work, he investigates the role of tourism in the climate compatible development of protected areas in Ethiopia.

Research focus: understanding climate change and tourism nexus by investigating the possibility of tourism as a driver of climate compatible development using Ethiopia as a case study

The interdependency of tourism, agriculture, local communities and nature conservation are complex and multidimensional. By using general system theory as a theoretical lens, Wondowossen aims to integrate all of these elements in order to optimise climate and development in one of Ethiopia’s World Heritage Sites, Simien Mountains National Park. In his PhD research, he will analyse the role of tourism in agricultural development as a leading economic activity to meet development and conservation goals in the national park. Born in Ethiopia, one of the countries most vulnerable to climate change, Wondowossen has a deep interest in analysing the interplay between the subsystems of social, support (tourism and agriculture) and nature in advancing climate compatible development.

His study offers three new perspectives on sustainability research. First, it explores the potential advantages of expanding tourism as a means of facilitating development as well as climate change adaptation and mitigation. Second, his research investigates the cause and effect relationship among variables of development and points out which subsystem must be sustainable to maintain the system as a whole. Third, the outcomes of this research may have implications to policies in developing countries such as the Nationally Appropriate Mitigation Actions (NAMAs), the National Adaptation Programs (NAPs) and the Reduction of Emissions from Deforestation and Degradation (REDD+).

Wondowossen holds an MSc in development science from Hiroshima University in Japan and is currently a PhD candidate at Griffith University in Australia where he is studying the nexus between climate change and the development of tourism in protected areas. Throughout his academic career, he has been honoured with multiple awards and scholarships.

The jury especially valued Wondowossen’s scientific and personal commitment to development and climate change issues. The jury believes that participating in the Green Talents forum will help him gain new insights into the complexity of the sustainability system and provide him with networking opportunities to connect with German institutions and experts in his field of research.