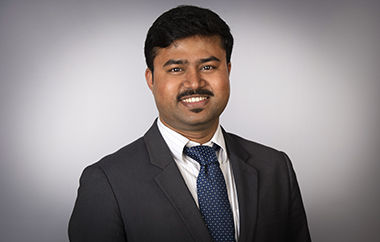 Debanjan Das is a chemist with special expertise in material science. He is searching for new ways of economically storing solar energy by producing hydrogen. Among other things he is looking for new transition metal-based electro-catalysts for water splitting.

Solar power is the most plentiful renewable energy source available to mankind. However, it is both intermittent and diffused, which makes it necessary to store energy generated this way. An attractive method to store solar energy is to split water into hydrogen and oxygen. The hydrogen can be stored easily and be used later as fuel to release energy and regenerate water, thereby enabling a carbon-neutral fuel production and consumption cycle. The process of water splitting, however, is thermodynamically uphill which makes the use of an effective catalyst inevitable. The state-of-the-art catalyst used to facilitate this reaction is noble metal-based and therefore scarce and very expensive. The success of the water splitting technology depends on the development of low-cost but highly efficient electro-catalysts that can preferably catalyse both the half-cell reaction of water splitting such as hydrogen evolution reaction as well as oxygen evolution reaction.

Debanjan is searching for new synthesis avenues to transition metal-based electro-catalysts for water splitting. His efforts are aimed at finding ways to develop cost-effective, highly active catalysts for water splitting consisting of raw materials that are not rare. Another idea Debanjan is pursuing is to make the production of hydrogen economically more attractive by replacing the oxygen evolution reaction at the anode with the oxidation of primary amines which are nitrogen compounds, instead of water. This results in the production of hydrogen and nitriles which makes the entire process economically more attractive, because nitriles can be sold at a higher price than oxygen resulting from water splitting. Moreover, this strategy provides a cleaner and safer alternative to the conventional industrial method of primary nitriles which uses cyanide (Sandmeyer’s method). Another facet of his research is developing low-cost, electrochemical glucose sensors for people suffering from diabetes. The development of such non-enzymatic sensors based on direct electro-catalytic oxidation is relevant for other electrolytic oxidations due to their direct-electron-transfer-shuttle-free detection.

The jury especially valued Debanjan’s contribution to electrolytic hydrogen technology which is highly significant to the storage of solar energy. They also lauded the versatility of his research and in regard to glucose sensors his practical approach to an urging medical issue.