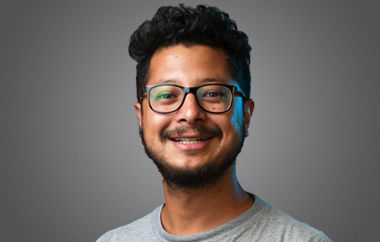 Bibek is working on the development of a smart composting system for organic household waste. City residents will be encouraged to compost their waste with high efficiency directly in their homes through the combination of a bin equipped with sensors and a mobile app.

Master in Applied Ecology and Conservation

Composting is a proven method of turning organic household waste into a useful product for farming and gardening. In rural areas, this method is relatively widespread, but in cities it is not used very often due to the lack of space inside and outside the houses. In many countries, organic household waste is still disposed of with other solid waste in open landfills, with all the known problems this causes for the environment and biodiversity. When waste collection in his home country Nepal was interrupted due to the Corona-related lockdown, Bibek started experimenting with composting the organic household waste in his home. Based on his experiments, he started talking to other people about composting and developed the idea of making home composting an efficient, appealing, and a user-friendly experience.

Bibek initiated an online survey to learn more about city residents’ perceptions of waste, composting, and their readiness for technology-assisted composting. His goal is to develop a smart composting system that mainly comprises an interactive compost bin and a dedicated mobile app. He is looking for a cost-effective solution and strives to contribute to the waste management system in Nepal, which is in need of improvement. He aims at making a difference for the community.

Bibek and his team have already built a prototype of the bin and programmed an app. They want to upgrade the system into a standard compost bin that will be equipped with sensors (temperature, humidity, soil moisture), a microcontroller, and a communication module. The measurement results of the sensors are to be transmitted to the app. The mobile app will present the real-time data in a user-friendly visualisation that is easy to interpret. The idea is to let the user feel the composting process and the progress in the bin. He and his team are envisioning to award points for adding waste, engagement, and compost preparation. They hope that these gamification elements will motivate users to continue composting.

However, the whole system needs to be upscaled, tested, and validated to function well before it will be launched in the community. This is where Bibek expects the sustainability research, resources, and experts in Germany to be valuable. Eventually, he wants to acquire entrepreneurial skills to build and run a start-up for the production of such smart compost systems.

Bibek works on improving the composting of organic waste in urban households as a very practical and sensible approach to a widespread problem. Due to his convincing concept, the jury chose this internationally experienced young scientist as a Green Talent awardee.

Take a look at this video that briefly introduces Bibek and his research: