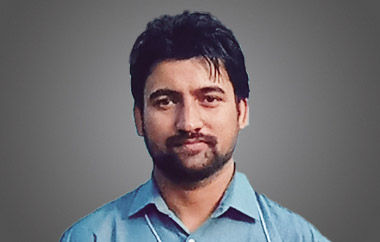 The combination of supercapacitors and batteries is particularly promising, as the properties of supercapacitors can compensate some of the disadvantages of batteries. Shashank is working on porous carbon materials derived from biowaste and its various composites with conducting polymers, metal oxides and metal-organic frameworks (MOFs) for use in supercapacitors.

Electrical energy storage devices are crucial to many aspects of the transition to a carbon neutral economy. But all devices have some drawbacks. Batteries have very high energy density but poor power density and very low cycle life. Supercapacitors, on the other hand, have high power density and long cycle life, but only moderate energy density. Shashank’s goal is to build a hybrid energy storage device that overcomes the limitations of both batteries and supercapacitors in a single device.

So far, he has developed supercapacitors from a variety of nanostructured materials such as graphene, metal oxides, carbon nitride, activated carbon, MOFs, their derived nanostructures and their various composites that have shown exceptional performance. He uses readily available biomass waste as a precursor to develop highly porous and conductive activated carbon.

His strategy is to prepare such activated carbon that has nanosheet morphology along with high porosity and conductivity. The nanosheet morphology is achieved by a hydrothermal pre-carbonisation technique followed by chemical activation route at high temperatures. These porous carbon nanosheet-based supercapacitors deliver the highest energy density, which is much higher than that of commercial activated carbon-based supercapacitors.

Shashank’s research clearly contributes to UN Sustainability Development Goal 7 (Affordable and Clean Energy) and, as far as electrical vehicles are concerned, also to Goal 11 (Sustainable Cities and Communities).
As a young but already experienced scientist, Shashank has the jury’s attention because of the highly relevant topic that bears promising new solutions for storing electrical energy. The jury also values his social commitment. He gives free lessons in Science, English, and Mathematics to street children.

The research of Shashank mainly contributes to the Sustainable Development Goals 7, 9, 11, 12:

Take a look at this video that briefly introduces Shashank and his research: