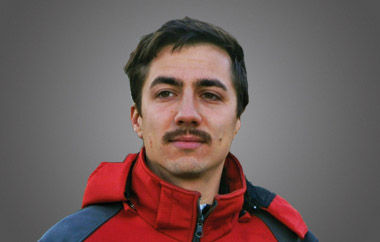 Germán studies the current and historical interactions between communities and their environment from a holistic biocultural perspective. His doctoral research examines the impact of climate change, deforestation, flooding, and mining on local communities in the middle Pilcomayo Basin, and possible ways forward.

The overarching theme of Germán’s doctoral thesis is the human-environment interactions of communities in the middle Pilcomayo river basin in the Gran Chaco. The Gran Chaco is a vast, wooded lowland region in central South America (divided between Paraguay, Bolivia, and Argentina) that is currently undergoing enormous deforestation. The Pilcomayo river crosses the Gran Chaco from west to east and is known as a “river without a course”. Due to its enormous sediment load, seasonal flows, and the plain basin, it systematically changes its course and floods vast areas. Nowadays, the river feeds a huge wetland called Bañado La Estrella in Formosa Province (Argentina). Germán’s research focuses on local communities around the Bañado La Estrella: the Western Qomle’ec / Toba people and the Criollo settlers (traditional cattle breeders that resemble the Gauchos). Both are constantly affected by floods, local deforestation, and the degradation of the river’s water quality due to mining, industrial fishing, and agrochemical abuse. In addition, they are already exposed to climate change hazards such as increasing weather variability, recurrent droughts, extreme rainfall events, and prolonged heat waves.

After analysing past human-environment relations from archaeological, geological, and historical sources, Germán investigates current environmental issues of these communities using an ethnographic approach. In an interdisciplinary study on local climate change, together with an PhD student in Atmospheric Science, they are documenting the main impacts of climate change from the communities’ perspective and their local responses to it. They plan to help communities develop actions to adapt to the hazards as well as to provide them with evidence to support their political claims. In this way, Germán’s work serves two UN Sustainable Development Goals in particular: Goal 15 (Life on Land), by addressing species extinction through deforestation and desertification, and Goal 11 (Sustainable Cities and Communities), by helping local communities to adapt to climate change and supporting their political claims. Germán sees his perspective on sustainability as bottom-up science, involving multiple local stakeholders to find ways to adapt to climate change, incorporating other research disciplines but not making any of them the only authorised voice.

Germán focuses on environmental anthropology in the Gran Chaco region of South America. The jury lauded the value of his novel interdisciplinary approach on an issue which has received very little academic attention so far. The jury was also impressed by his active engagement supporting local communities.

The research of Germán mainly contributes to the Sustainable Development Goals 11, 13, 15, 17:

Take a look at this video that briefly introduces Germán and his research: 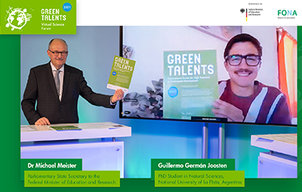 Experiences as a 2021 Green Talent by Germán Joosten