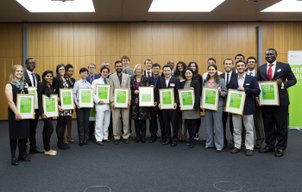 On 7 November 2014, the German Federal Minister of Education and Research Professor Johanna Wanka honoured the winners of the Green Talents Competition 2014 during a festive ceremony in the new ministry building in Berlin. In her speech of commendation, she stressed the importance of the initiative for future international science cooperation. more: Award Ceremony 2014. 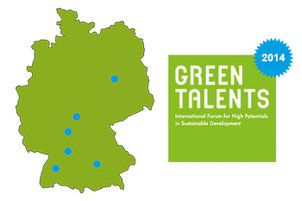 The Green Talents - International Forum for High-Potentials in Sustainable Development 2014 took place from 26 October (day of arrival) to 10 November (day of departure). Have a look at where we have been in 2014... more: Science Forum 2014.

25 young researchers from around the world have won the "Green Talents 2014 - International Forum for High Potentials in Sustainable Development" Competition of the German Federal Ministry of Education and Research (BMBF). Here you can find a short profile of all awardees 2014. more: Awardees 2014.