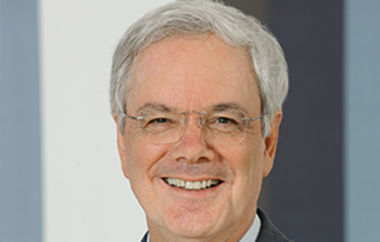 Chairman of the Board of Directors of Forschungszentrum Jülich and Vice-President of the Helmholtz Association.

In 1983 he joined the University of Cologne as Professor of Applied Mathematics and Director of the Mathematical Institute. In 1988, he also became Director of the Institute of Computer Science at the university. He co-founded the “Centre for Parallel Computing” (ZPR) in 1993 and became chairman of its board. During that time, he was elected Dean of the Mathematical and Scientific Faculty of the University of Cologne, a post he held from 1989 to 1991. He was a member of the board of the German Aerospace Centre (DLR) for ten years and spent four years as a German delegate to the European Space Agency (ESA). For the past five years, he has been Chairman of the Board of Directors of Forschungszentrum Jülich, one of the largest research centres in Europe. As a scientist, his interests include discrete and combinatorial mathematics as well as scientific computing and supercomputing.

Aside from his work at Forschungszentrum Jülich, Professor Bachem is Vice-President of the Helmholtz Association and coordinator of the key technologies research field, as well as a member of a number of advisory and supervisory boards of research institutions and companies. He has published five books and 70 scientific papers, and has given numerous national and international lectures.