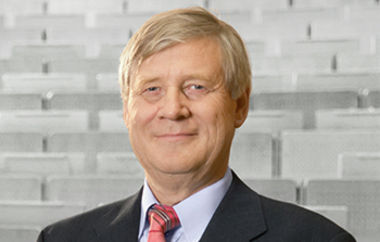 Director of the Fraunhofer Institute for Wind Energy and Energy System Technology (IWES) and member of the German Advisory Council on Global Change (WBGU).

Professor Schmid began his scientific career at the Nuclear Research Centre Karlsruhe and earned his PhD at the University of Karlsruhe before joining Dornier System Ltd., a company that manufactures aircraft and spacecraft as well as related machinery, as a project manager. He returned to academia in 1981 to head the Department of System Engineering at the Fraunhofer Institute for Solar Energy Systems in Freiburg. In 1992 he returned to the University of Karlsruhe as Professor for the Sustainable Production of Electrical Energy.

Three years later, he joined the Institute for Solar Energy Technology (ISET) in Kassel, which conducts applied research in the areas of renewable energies, efficient use of energy and energy systems technology. At ISET, he was both Professor for Efficient Energy Conversion at the University of Kassel, and a member of the executive board, later becoming the board’s chairman. In 2009, ISET merged with the Fraunhofer Center for Wind Energy and Maritime Engineering CWMT to form the Fraunhofer Institute for Wind Energy and Energy System Technology IWES. He became Director of Fraunhofer IWES, a post he still holds today.

Beyond his work at IWES, Professor Schmid is a member of the German Advisory Council on Global Change (WBGU). He was the founding President of the European Academy for Wind Energy and has been the chairman of several renowned international conferences, including the 2nd World Conference and Exhibition on Photovoltaic Solar Energy Conversion in Vienna and the European Wind Energy Conference and Exhibition in Copenhagen.

"We must accelerate the pace of innovation towards a sustainable global economy. International cooperation is crucial for this development. Uniting young scientists within the context of the Green Talents competition is therefore a contribution that points to the right direction."