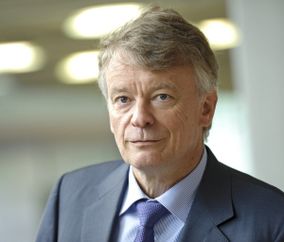 Hermann Requardt studied physics at the Technical University of Darmstadt and the Johann Wolfgang Goethe University Frankfurt / Main. After completing his studies he worked at Frankfurt University as an academic assistant. In 1982 he joined the Deutsche Forschungs- und Versuchsanstalt für Luft- und Raumfahrt in Cologne, earning his Ph.D. in physics in 1984.

Hermann Requardt started his career at Siemens in the Medical Engineering Group in 1984. Later he was assigned group manager and head of development in the Magnetic Resonance Division before he became the head of the division in 1995. In 2001 Hermann Requardt was appointed a member of the group executive management of the Medical Solutions Group.

In 2006 his scientific achievements were awarded with an honorary professorship by the Johann Wolfgang Goethe University Frankfurt am Main. In the same year he became a member of the Managing Board of Siemens AG as chief technology officer and head of the central Corporate Technology Department. Since December 2008 he is furthermore CEO of the Healthcare Sector. As deputy director of the Karl Heinz Beckurts Foundation, Hermann Requardt also promotes the partnership between science and business. In addition, Prof. Requardt is a member of the Industry-Science Research Alliance.

“Environmental research is the key to our future and a great deal is expected of the next generation of scientists. The “Green Talents Forum” invites gifted young researchers from all over the world to pool their talents and find solutions to global environmental challenges.”