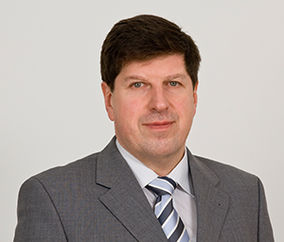 Director of the Fraunhofer Institute for Interfacial Engineering and Biotechnology (IGB)

After completing his doctorate in chemistry, Thomas Hirth became a scientific assistant at the Fraunhofer Institute for Chemical Technology (ICT) in Karslruhe in 1992. Only two and a half years later, he was appointed head of the Department of Environmental Engineering. The topic of his doctoral thesis in the field of “supercritical fluids” remained one of his major interests at the ICT and formed the basis for numerous developments – most recently a process that enables the production of monomers for plastics from sugar.

Before Professor Hirth was appointed director of the Fraunhofer Institute for Interfacial Engineering and Biotechnology (IGB) in Stuttgart in December 2007, he acted as the coordinator and initiator of numerous projects within the Fraunhofer-Gesellschaft, particularly in the areas of industrial biotechnology and the use of renewable resources.

In April 2008, Professor Hirth also took on the role of director of the Institute for Interfacial Process Engineering (IGVT) at the University of Stuttgart, where he is establishing new areas of research, as he has done at the IGB. Thanks to this broader basis, Professor Hirth is involved in the full spectrum of research work – from basic research and preparatory research at the university institute to applied research and contract research at the Fraunhofer Institute.

"Towards sustainability with environmental technologies developed by 'Green Talents'."