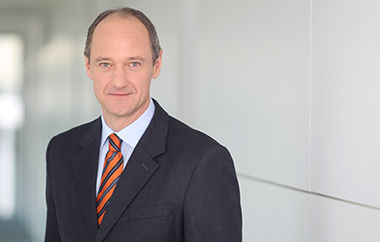 Roland Busch is a Member of the Managing Board of Siemens AG. He is responsible for the company’s Asia/Australia Region as well as for the infrastructure businesses including the Energy Management, Building Technologies and Mobility Divisions. In addition, Busch is in charge of the company's Sustainability as well as Sales activities.

Busch joined Siemens in 1994, as a project manager at Corporate Research and Development. He held various positions developing expertise and leadership. In 2002, Busch was appointed head of the Infotainment Solutions Division. In 2005, he relocated to Shanghai, where he served as CEO of Siemens VDO Automotive Asia Pacific. In 2007, he returned to Germany to head the Mass Transit Division at the Transportation Systems Group. In 2008, he became head of Corporate Strategies. In 2011, he was appointed CEO of the Infrastructure & Cities Sector and Member of the Managing Board.

Roland Busch studied physics at Friedrich Alexander University in Erlangen-Nuremberg, Germany – where he received his doctorate – and at the University of Grenoble in France.

Press pictures and further information are available at: http://www.siemens.com/about/en/management-structure/management-board/busch.htm

“Siemens aims to create long-term value for our customers and the societies we are active in. We do this by tackling global trends such as climate change, urbanization or digitalization. Our global expertise and innovation power are setting the path for it. The Green Talents-competition is a valuable forum to enable young professionals to develop sustainable development further.”