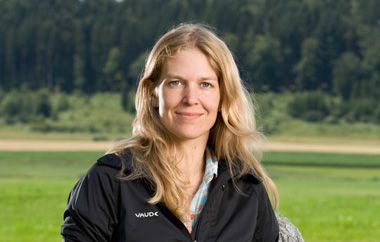 "A sustainable approach, may it be in the field of economics or science, is becoming more and more the decisive factor not only for success but also for the common good. Therefore it is essential to implement sustainability in education and research. This is the approach of the Green Talents programme which I strongly promote."

Dr Antje von Dewitz is the CEO of the family-run outdoor brand VAUDE in Tettnang. After studying Economic and Cultural Studies at the University of Passau, she became a product manager at VAUDE and later took on responsibility for company communications. In 2005, she worked as a marketing manager and in 2009 took over the company management from her father, Albrecht von Dewitz. She received her Ph.D. and worked at the Endowed Chair of Entrepreneurship at the University of Hohenheim. Besides her engagement at VAUDE, she is a member of the Project Advisory Board for "Natural Capital Germany - TEEB DE" and on the Advisory Board of the German Federal Environmental Foundation.

Based on the company´s focus on environmental and social responsibility, Dr Antje von Dewitz developed a sustainability-oriented business strategy. For its outstanding economic, social and ecological commitment, the company received numerous awards including the B.A.U.M. Environmental Award (2012) and the Economic Medal of the Federal State of Baden-Württemberg (2011). In 2008, VAUDE was the first outdoor company to be certified by EMAS. Since 2012, the company headquarters in Tettnang and all products manufactured there have been climate neutral. The percentage of VAUDE Green Shape products, which feature special eco-friendly and resource-conserving manufacturing, is constantly growing.