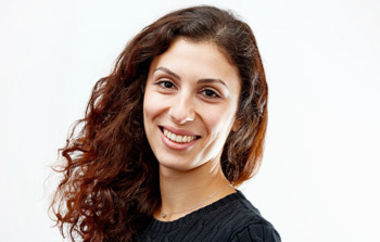 Iordania holds a PhD in Material Science and Engineering from the University of Florida, USA. She is currently working as a postdoctoral researcher at North Carolina State University.

Iordania has extensive experience in the design, fabrication and characterization of organic semiconductor optoelectronic devices, as well as an in-depth understanding of fundamental device physics. The main focus of her PhD research was the development of highly efficient organic solar cells. In 2011 she obtained the prestigious Fulbright Scholarship.

For her achievements, Iordania was awarded a Green Talent in 2015. Her work with organic solar cells has become extremely valuable for increasing the use of solar power as a renewable energy resource. Iordania was the Chair of the Student Safety Council in her department where she worked with students, teachers and researchers to improve the culture of safety in laboratories.

Having obtained a prestigious Fulbright scholarship towards her Master’s degree, Iordania Constantinou is now researching for her PhD in Materials Science and Engineering to develop more economical solar cells based on organic materials.

Although there are research projects into solar energy being funded all around the world, the cost of producing solar cells is so great that, in 2014, solar power only covered about 1% of the global electricity demand. Iordania Constantinou’s PhD project seeks to address the key factor in the development of the solar energy industry: making it cost efficient for operators and investors. Her research into the development of highly efficient organic solar cells offers a potentially more economical method for harvesting solar power.

At the University of Florida, Iordania has worked as part of an international, interdisciplinary team of chemists and physicists as well as other material scientists and engineers. As well as working within this team, she is also the Chair of the Student Safety Council in her department; she is keen to work with students, teachers and researchers to improve the culture of safety in research laboratories. Iordania had both a personal and professional interest in pursuing solar energy research. Coming from Cyprus, which sees the sun for 340 days in the year, she wants to see solar energy be more widely exploited in her home country.

Also, on a professional level, she believes that by pursuing a career in Engineering, she can set a precedent for other women: “I believe that the fact that I am a woman in a traditionally male profession has a positive impact on social sustainability... I also believe that more diversity in a team or workforce leads to more creative ideas being brought to the table.”

The jury complimented Iordania’s commitment not only to her research but also to her scientific community. Her work with organic solar cells is extremely useful for increasing the use of solar power as a renewable energy resource.